Recently, Sensor Tower announced the latest data as of Q3 2019. According to the research organization, the global app download hit 29.6 billion in Q3. Interestingly, the top 1% of app publishers account for 80% of app downloads while other publishers have about 6 billion downloads (20%). This bottom 99%, which equates to roughly 784,080 publishers, averaged approximately 7,650 downloads each during the quarter. This is less than one-thousandth of a percent of the downloads Facebook generated in the quarter (682 million). 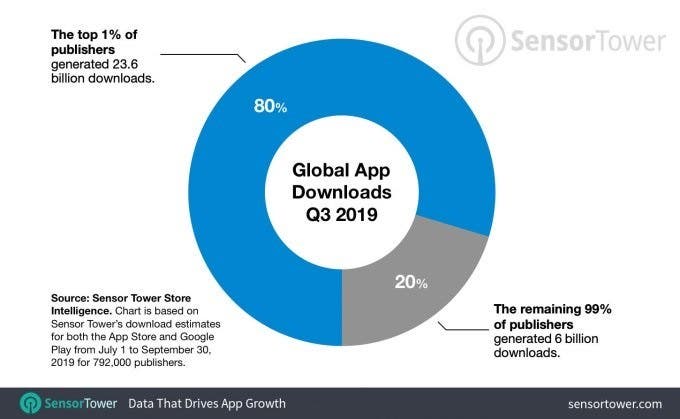 In terms of games, the top 1% of publishers have over 9.1 billion downloads. This accounts for 82% of the total downloads of 11.1 billion. On average, each application has more than 8.4 million installations. The remaining 106,290 publishers account for 18%, and on average, each download was only about 18,000.

In terms of revenue, total revenue for the quarter is $22 billion, and 1,526 publishers received $20.5 billion in revenue. The remaining 151,056 publishers earned $1.5 billion, averaging only about $9,990 per publisher. According to Sensor Tower, over the years, from the perspective of application installation and revenue, the share of the top 1% of publishers does not change significantly. 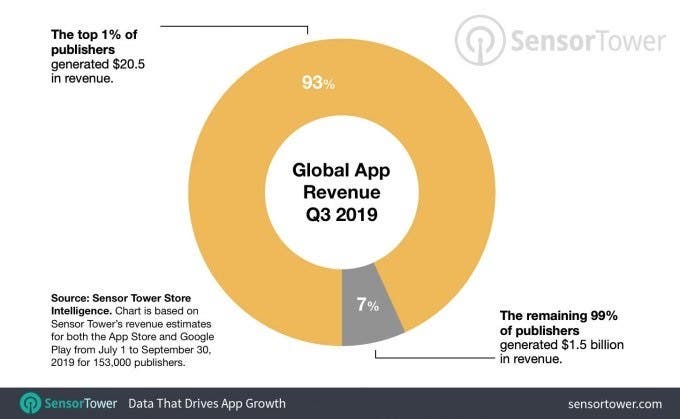 The global app download record shows an interesting trend in the app development industry. Its more like you are in, work hard, enter the 1% and make everything. For those who just bring an app, no maintenance, upgrade or support, there is every probability that you just get a few downloads, make a few bucks and that’s it.

Previous Vivo to Soon Launch Vivo Y9s in China, Could Be the Rebranded Vivo S1 Pro

Next China never asked Apple to unlock the iPhone, unlike the US