Huawei today announced a plethora of new products such as MateBook D laptops,  SmartScreen and MatePad Pro expanding its portfolio even further. Apart from typical products, the smartphone maker has also launched its new router dubbed Huawei A2. The key highlight of the router is the integration of NFC connectivity allowing users to connect with a single tap. In fact, this is the first WiFi router to ever come with one-touch NFC support. 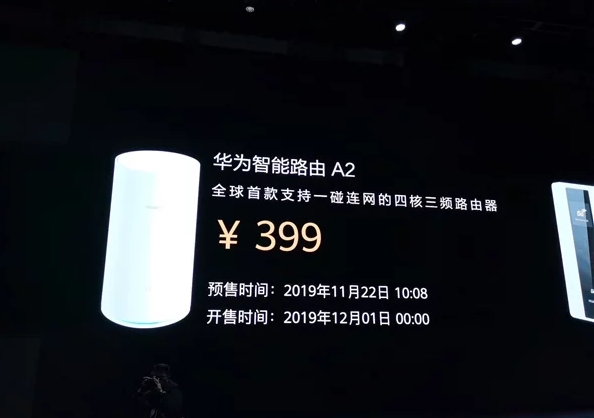 Huawei A2 WiFi router comes in a modern, sleek and cylindrical shape bestowing minimal branding on the front. The all-new A2 WiFi router is powered by a 1.4GHz CPU paired with three Lingyi WiFi chips and six independent signal amplifiers. Out of these three chips, one of them is for 2.4GHz band while the other two for 5GHz. To transmit signals to a much longer range, the router comes with high-performance cores that boost signal transmissions. Furthermore, the device has four unique bands of 2.4Ghz, 5GHz (low-frequency) and 5GHz (high-frequency). It can switch to a better frequency band automatically.

With the help of NFC, users can connect to the WiFi network by simply tapping on the router without entering any authentication details. According to the brand, the inclusion of NFC reduces the hassle of scanning codes to gain access to the network. The router supports a wireless rate of 2134Mbps and three-band integration. Coming to security, the router comes with a slew of features such as anti-DOS/DDOS attacks. anti-brute force and many more. Like any other router, you have the ability to whitelist or blacklist any connected device.

Huawei A2 WiFi router comes with a price tag of 399 Yuan (roughly $57). The device is already up for pre-order and will see its official launch on 1st December. There is no information on whether the product will hit the other major markets or not.