Last month, Realme launched its first premium smartphone dubbed Realme X2 Pro in China. The same smartphone recently made its way to the Indian market. With the X2 Pro, the smartphone maker managed to carve out its place in flagship segment competing the rivals. It seems like the company is now aiming for the 5G focussed smartphone. The smartphone maker is currently working on its upcoming Realme X50 5G smartphone. 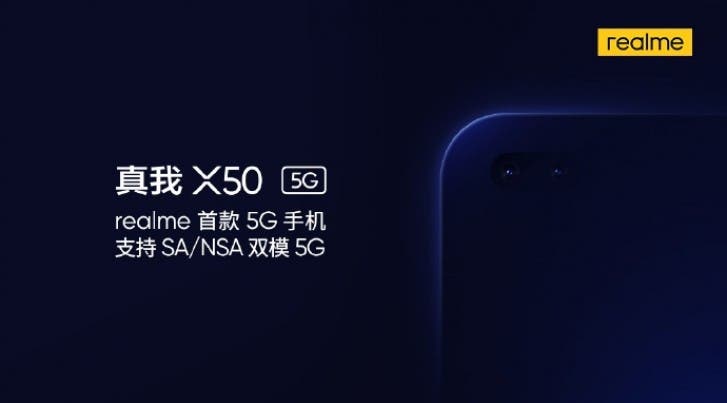 Realme China’s CMO Xu Qi Chase posted a teaser image of the smartphone and has also talked about the availability. Since the announcement way back, this is the very first official update on the company’s next 5G smartphone. As you can tell from the teaser, Realme X50 5G will come with a punch-hole display housing two selfie shooters. This makes X50 the company’s first 5G as well as the punch-hole smartphone.

Coming to the moniker, the X here stands for the all-new lineup which touts to bring new technology.  The five here represents the new 5G generation while the zero is for new beginnings. As of now, we don’t have much information about the specifications of the device. Furthermore, Realme X50 5G is going to be the first smartphone to come with Qualcomm’s upcoming dual-mode 5G chipset. The teaser also reveals the fact that the device will run on both standalone as well as non-standalone 5G networks.

Although Chase has mentioned that the device will launch soon, there is no solid information on the exact launch timeline. Since the device will feature Qualcomm’s dual-mode 5G chipset, the device will see its official unveiling in December. For those who’re unaware, the chipset manufacturer has its tech summit next month somewhere between Dec 3 and 5. We’re expecting more teasers to come forward giving us more glimpse of the smartphone.

Next Vivo X30 spotted in a new video teaser