OnePlus has rose to a mighty position in the smartphone market of India. It has been five years since the company entered the market and they have been leading the premium smartphones segment in the country for a while now. OnePlus smartphones rarely go on sale but to celebrate their 5th year anniversary, the company is offering discounts up to ₹11,000 on three of their models on Amazon. The offer period has already begun from 25th November and will last until 2nd December. 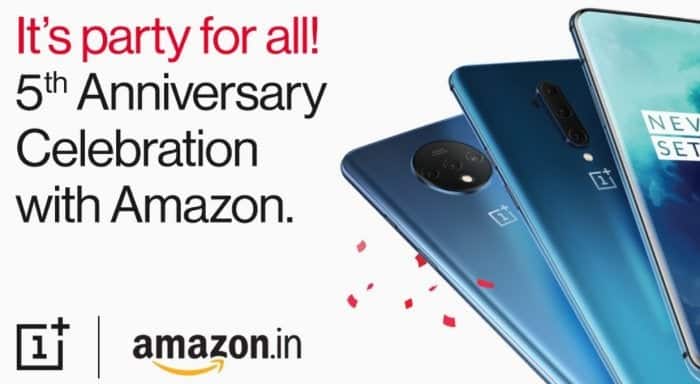 The OnePlus 5th Anniversary sale is hosted by none other than Amazon Indian, the official online retailer for the brand. The phones that are available at discounted prices are OnePlus 7 Pro, OnePlus 7T, and OnePlus 7T Pro. Out of all the three models, the OnePlus 7 Pro with 6GB + 128GB configuration which debuted at ₹48,999 receives the highest discount. On behalf of the sale, this model will retail for only ₹39,999 which is a bargain. If that’s not enough, buyers can avail an additional ₹2,000 instant discount using HDFC Bank Debit/Credit card. Hence, interested people can now buy the OnePlus 7 Pro at an effective price of ₹37999.

Lastly, OnePlus is not offering any discount on OnePlus 7T Pro but buyers can avail 3,000 instant discount through HDFC cards. Hence, it will cost only ₹50,999, rather than its official ₹53,999 price tag. Buyers can also opt for no-cost EMIs for up to 6 months on all the three phones.