Huawei is all set to introduce its next-gen Nova devices under the Nova 6 lineup in China. The official launch event is scheduled for December 5. The brand will launch two devices dubbed Huawei Nova 6 and Huawei Nova 6 5G which has already made an appearance on 3C listing earlier.  In fact, the upcoming Nova 6 5G has been generating a lot of news with the company teasing it every now and then. Ahead of the launch, the smartphone has now surfaced on the GeekBench listing revealing key specifications along the way. 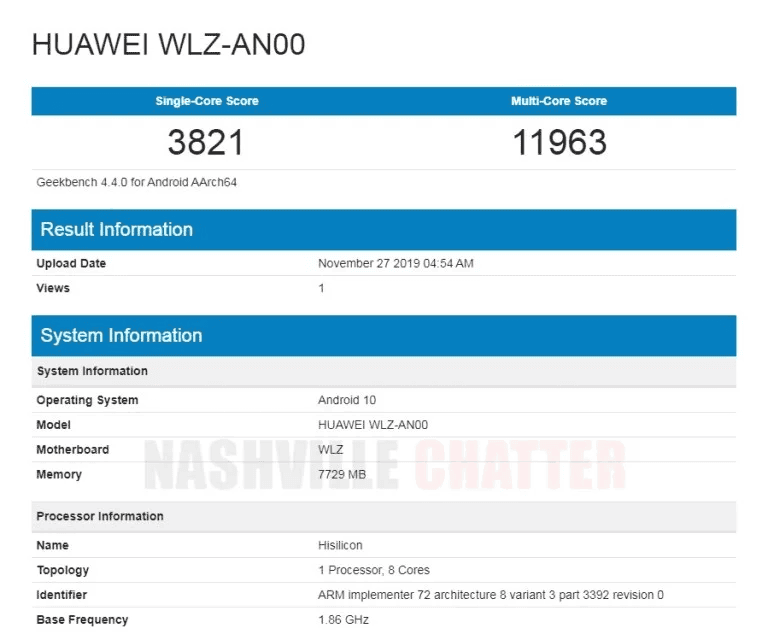 As per the GeekBench listing, the Nova 6 5G will run on the latest HiSilicon Kirin 990 chipset under the hood. Huawei’s sub-brand Honor has already launched two new devices recently which also packs in Kirin 990 SoC. For those who’re unaware, the chipset is manufactured using a 7nm+ fabrication process. It supports both non-standalone and standalone 5G connectivity simultaneously. The 5G variant of the chipset has a base frequency of 1.96Ghz while the regular features 1.86Ghz frequency.

Furthermore, the device is seen running on the latest Android 10 operating system. It also features an 8GB of RAM packed inside. Coming to the benchmarks, the device managed to score 3821 in single-core performance and 11963 in multi-core performance. It is worth mentioning that the released version might feature different benchmark scores.

Considering previous teasers, Huawei Nova 6 5G is expected to come with an IPS LCD display with a punch-hole design. The cutout will house a dual selfie camera featuring a 32MP wide and 8MP ultrawide angle lens. Furthermore, we might see the integration night mode in selfie photography. The users will be able to click a 105-degree ultrawide selfie without any selfie stick. The device will feature a quad-camera module at the back featuring 60MP, 16MP, 12MP, and 2MP sensors. All of these are powered by a 4,000mAh battery with the support of 40W fast charging. For biometrics, the fingerprint sensor is present on the side with software-enabled fast unlock.

Next OnePlus 7T will get a new color you'll love!