Samsung has been working on the successor of Galaxy A50 / A50s dubbed as the Galaxy A51. The phone has also been leaked multiple times revealing not only its design but also a few of its specifications. However, a new leak from SamMobile spills the beans on every major detail of the mid-ranger  as well as some official press renders.

The Samsung Galaxy A51 is expected to be unveiled on December 12 according to a teaser video posted by Samsung Vietnam and the sources of SamMobile have also confirmed the same. As you can see from the press renders, the upcoming Galaxy A51 will feature the same 3D Glasstic design as its predecessor but with an  L-shaped camera setup at the rear as found on numerous CAD renders of future Samsung phones such as the Galaxy S11 series and lite version of Galaxy S10 and Galaxy Note 10. 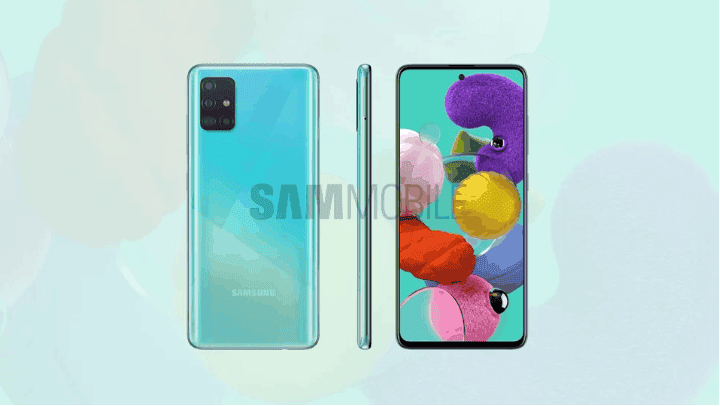 On the front, the phone will sport a 6.5-inches FHD+ Super AMOLED Infinity-O display housing a 32MP camera of f/2.2 aperture and a fingerprint sensor underneath it. Under the hood, the device will feature the Exynos 9611 processor coupled with 4GB/6GB RAM and 64GB/128GB internal storage. Additionally, it will also come with a microSD card slot to further expand the storage up to 512GB.

The quad-camera array at the back of the phone will include a 48MP primary sensor with f/2.0 aperture paired with a 12MP sensor accompanied by an ultra-wide f/2.2 aperture lens. The other two sensors are a 5MP f/2.4 macro unit and a 5MP depth sensor. The phone will measure 158.5 x 73.6 x 7.9mm in size and will weigh 172g. It will be available in Prism Crush White, Black, Pink, and Blue colour finishes with a 4,000mAh battery powering it with support for 15W fast charging.

We can expect the price of the Galaxy A51 to be similar to the launch price of its predecessor as the Galaxy A50s just received a price cut last month.

This is the world’s first Lightning port on Android

Samsung Galaxy A51 will get Android 13, but don’t expect frequent updates

Galaxy Tab S7 series, Galaxy A51 up for grabs at a discounted price tag in the U.S.