The Samsung Galaxy Note 9 came back in the last year to reign over late 2018 smartphones. The handset packed very capable specifications, but was considered just an incremental upgrade over the Galaxy Note 8. The handset came with Android 8.1 Oreo and was subsequently updated to Android 9 Pie. Considering that the handset still has one more major Android update to receive before reaching the deadline, Samsung started the Android 10 One UI 2.0 beta program for the phablet. Today, it is receiving the fourth beta update.

It’s a good amount of betas considering that Note 9 is running through the program for over a month. The latest release comes to address a single bug ahead of the stable release. According to Samsung’s roadmap, the 2018 phablet will receive stable One UI 2.0 in January next year. The new update bears firmware version N960FXXU4ZSLB and weighs in at just over 167MB. As previously mentioned, it comes to address just a single bug and it is the S-Pen translation bug that has been reported by users in the latest betas. 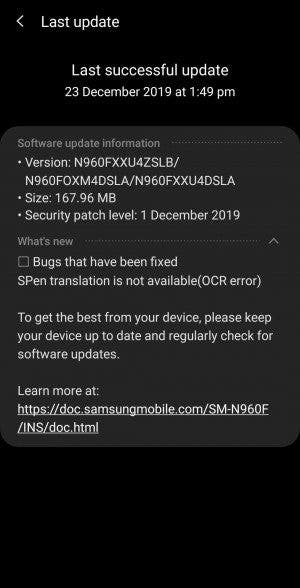 Apart from this change it still packs December security patch and there’s no new feature coming with this release. The fact that Samsung needed to fix only a single bug in this new beta is a good sign that the Korean firm is getting ready for the public stable release.

Android 10 should be the last major Android update coming for the Galaxy Note 9. However, security and incremental updates should keep coming in the next year.