5G is the mainstream of the market. But everyone is curious whether the speed of the 5G network has increased too much compared to the 4G network. In the new version of AnTuTu V8, the benchmark added a network speed measurement function. Now, it can simultaneously test download and upload speed on the smartphone using both mobile and WiFi connectivity options. Plus, it can provide delay and packet loss data information.

As for now, AnTuTu has released a speed test report, which is also the first report. It has recorded the smartphone network speed starting in November 2019. In this report, AnTuTu sorted the average download speed of the smartphone. The environment is divided into a mobile network and Wi-Fi network. Well, the average download speed, latency (ms), maximum download/upload speed and other data are listed in this report. But the maximum speed only represents the models tested on the Antutu platform.

And in this network speed report, after integrating all the scores, the first one is the Huawei Mate 30 Pro 5G version. The average download speed and upload speeds are 125.52Mbps and 27.35Mbps, respectively. By the way, among top 20 models, this is the only smartphone on the list with an average download speed of over 100Mbps. Its delay is less than 40ms, and the maximum download and upload speeds are as high as 1206.96Mbps and 622.77Mbps. 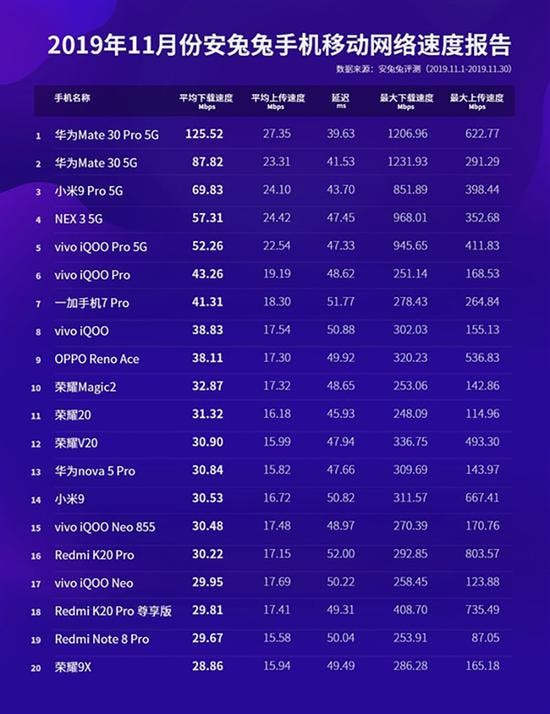 Other brands of smartphones also have good performance. Especially, this is true for the Xiaomi Mi 9 Pro 5G, the VIVO NEX 3 5G, the VIVO iQOO Pro 5G, and other 5G smartphones. The performance of these 5G phones showed an average download speed of only 50-70Mbps and upload speed at 22-24Mbps. The latency is slightly higher than that of the Huawei models.

However, smartphones that do not support 5G have a large gap. From the data, it is not difficult to see that the network speed of 5G smartphones compared to 4G smartphones has almost reached 5 times the maximum download speed.

When it comes to the WiFi network speed test, everything changes. The speed depends on various factors such as the home architecture, the phone’s built-in modem, the router, etc. 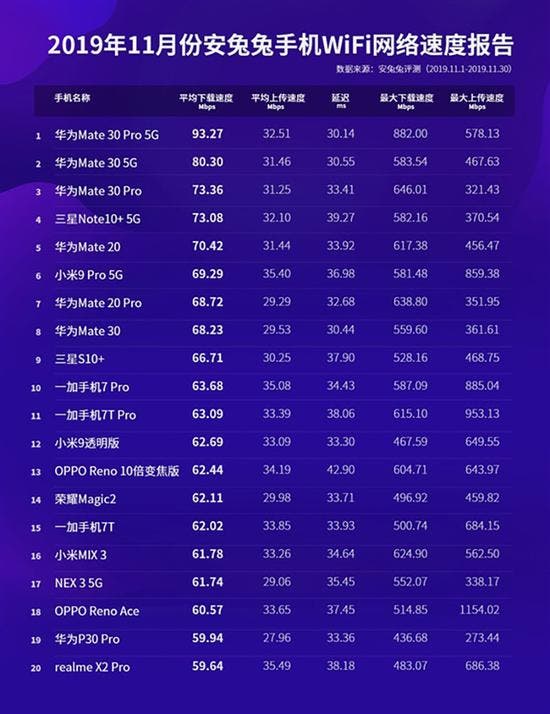 The Samsung Note 10+ 5G and Samsung S10 + also entered the top ten. The rest of the positions are taken by the Xiaomi Mi 9 Pro 5G and OnePlus 7 Pro. We can see that even in the Realme X2 Pro, the average download speed has almost reached 60Mbps. This shows that the current popularity of 100Mbps networks in homes is quite high.