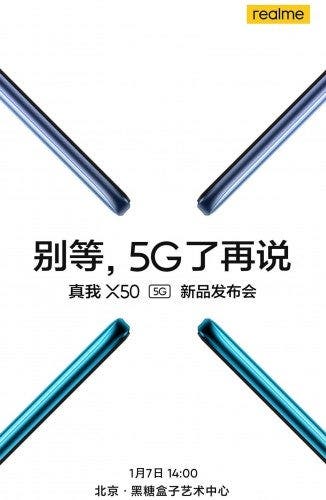 For those who’re unaware, the company has already been teasing bits of information for a couple of weeks now. Thanks to the previous teasers, we are already aware of what to expect from the upcoming smartphone. Since the launch event is not far, we should see more teasers and posters surfacing online in the coming days. With the Realme X50 5G, the smartphone will enter into the 5G connectivity space. We have already seen numerous smartphone makers entering into the 5G segment this year and the same trend will be observed next year.

The Realme X50 will come with a dual punch-hole display just like the one we saw with Realme K30 5G. Under the hood, the device will run on the Snapdragon 765G chipset. The SoC should get paired with up to 12GB RAM and up to 256GB of internal storage. We might see the quad-camera module at the back with a 64MP primary sensor, an 8MP secondary and two 2MP remaining sensors. The front of the phone will feature a dual 32MP+8MP camera module for selfies and video calling.

The phone will come with the support of VOOC 4.0 flash charging technology that can charge the phone to up to 70% in just 30 minutes. Lastly, the device will feature an 8mm ultra-large liquid cooled copper tube offering five-dimensional ice-cooled heat dissipation.