Counterpoint Research recently released its smartphone sales report for Q3 2019 and according to that, the Apple iPhone XR from 2018 was the top-selling smartphone of the last quarter. It alone secured 3% of the total smartphone sales during this period and has been in the top ten list since Q4 2018, a quarter after its launch in September of 2018. Interestingly, Samsung managed to fight off its Chinese competitors and grabbed the second and third sport with the Galaxy A10 and Galaxy A50 respectively.

According to Counterpoint Research, the iPhone XR alone contributed one-quarter of the total shipments by Apple in Q3 2019. The Cupertino giant dropped the prices of iPhone XR across different regions after the launch of iPhone 11 which contributed to sales in such a huge amount in the last quarter. Even the latest iPhone 11 bagged the fifth position with 1.6%, thanks to Apple’s competitive pricing in almost all the markets. 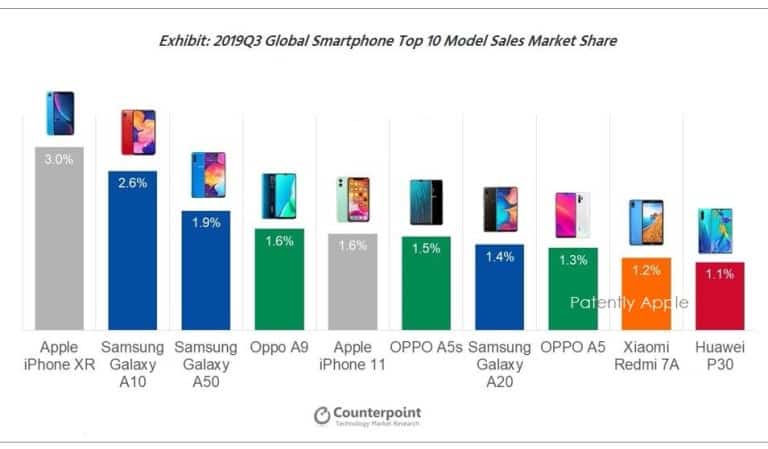 Taking the next two places were Samsung’s Galaxy A10 (2.6%) and Galaxy A50 (1.9%), both are which are part of the company’s new revamped line of Galaxy A series of smartphones. The South Korean smartphone maker’s Galaxy A20 with 1.4% captured the seventh position, increasing the count to three models for Samsung in the top ten list. Further, the fourth, sixth, and eighth positions were occupied by Oppo with its Oppo A9 (1.6%), Oppo A5s (1.5%), and Oppo A5 (1.3%).

The last two positions, ninth and tenth to be exact were acquired by Redmi 7A(1.2%) and Huawei P30(1.1%). It is interesting to see a Huawei phone in the top ten selling smartphones of Q3 2019 despite the ban imposed by the US government.

Next Ren Zhengfei: Huawei has a very ambitious "Plan B" - CNN