The president of the US, Donald Trump, recently blasted Apple for not helping the FBI with an on-going investigation. Apple maintains that it has done its best and can not create backdoors on its devices. Yesterday, Apple released a semi-annual transparency report, revealing the number of times countries/regions have requested user data from the company worldwide. 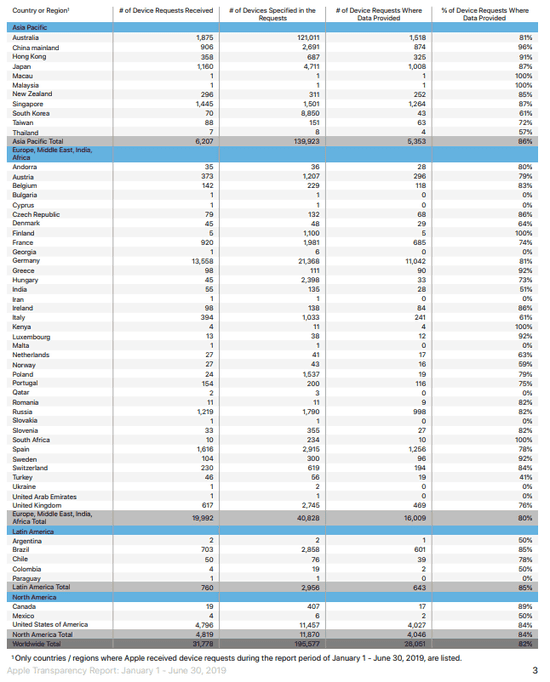 From the report, Germany and the US clearly lead in such a request. According to Apple, between January 1, 2019, and June 30, 2019, countries/regions made 31,778 requests. This information includes which users are associated with which equipment, as well as purchase, customer service, and repair information. Apple met the request requirement 82% of the time. Germany tops the chart with 13,558 requests. The US closely follows with 4,796 requests within six months.

Apple also let out some information on the US national security-related request under the Foreign Intelligence Surveillance Act (FISA). In 6 months, it received 0 to 499 FISA non-content data requests. For subscriber and transaction information, it got between 11,000 to 11,499 requests.

Apple also received 0 to 499 national security letters from the Federal Bureau of Investigation (FBI). These letters involves subscriber data and other issues, involving 2,500 to 2,999 users and accounts. In addition, these letters were without supervision or approval from the courts.

Previous Samsung Galaxy A71 5G Possibly Coming to the US