The top five smartphone OEMs in India had their best performance yet in Q3 2019 during the Diwali festive season. Realme showed the most remarkable rate of growth among all the players, but unfortunately, the brand did not keep up with its success in the following quarters as per an IDC report by Economic Times. Whereas, companies like Xiaomi, Samsung, and Vivo retained their positions further improving the number of shipments throughout the quarter.

The shipments of Realme smartphones spiked by 16.74% in September (the brand’s all-time high) but dipped to 9.3% and 8.23% in November and December respectively. Commenting on this matter, Upasana Joshi, the associate manager for client devices at IDC said Realme’s market share surged high as online sales were high during the festive season. Since 80% of its total sales come from online, the brand could not continue to maintain its position in the following months. 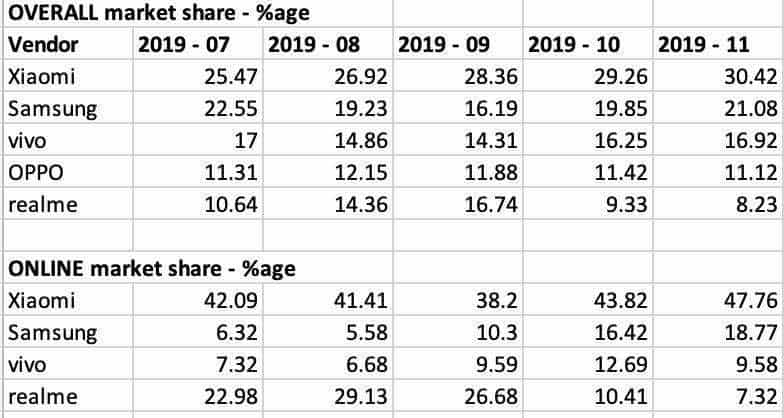 On the other hand, Samsung’s market share went up from 16.19% in September to 19.85% and 21.08% in the subsequent months of October and November. It was the Galaxy M30s which helped in boosting the shipments for the company. Additionally, a Xiaomi spokesperson said its Q3 was good and it managed to sell over one million units of its then newly announced Redmi Note 8 series in the country. The Chinese smartphone maker is expected to further improve its performance by refreshing the existing line-ups and launching new products in 2020 as part of its new strategy.

Vivo, the sister brand of Realme also had a great running in the same time period. Its market share increased from 14.31% in September to 16.92% in November. However, the company’s online market share slipped to 9.58% in November from 12.69% in October.