In the past, the Samsung Galaxy S series flagships were the first to get the latest Snapdragon top-end mobile platforms. As for now, everything has changed. We mean Xiaomi and other manufacturers from the East bring the new Snapdragon chips to the market. And though it seems the upcoming Samsung Galaxy S20 will continue this trend, there are many features and design elements that will attract more users. Recently, the phone’s rendering was leaked, showing a penta-camera design. Today, another rendering that comes our way from the South Korean media showed all details of the forthcoming Samsung flagship. 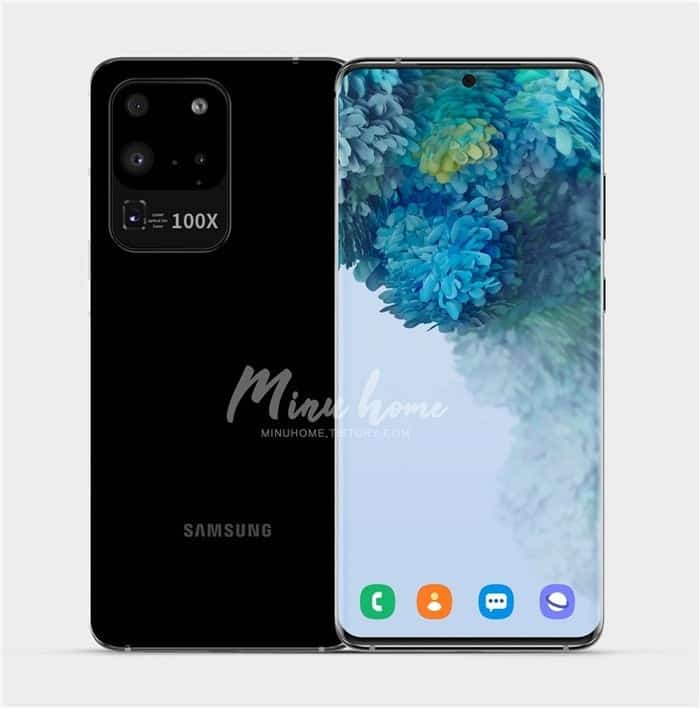 From this picture, we can see that in addition to the penta-camera solution that has been exposed, the Samsung Galaxy S20 Ultra is also marked with detailed parameter information next to the ToF camera. The word “100X” is particularly noticeable. One of the big selling points of the S20 Ultra will be the 100x hybrid zoom. The front of the machine adopts a full-screen design with a hole punch on the middle upper side. The screen has a large curvature.

Well, previously, we have heard about some key features of the Samsung Galaxy S20 Ultra. According to them, the phone measures 166.9 x 76 x 10.2mm. Thus, it’s not small and may cause some difficulties for small-handed users. Anyway, it sports a 6.9-inch 120Hz 2K Infinity-O AMOLED screen and is equipped with Exynos 990, based on a 7-nanometer process chip. The battery capacity is 5000mAh. The rear camera consists of a 108MP main lens, a 48MP periscope telephoto lens (supports 10x optical zoom and 100x digital zoom), an ultra-wide-angle lens, and a ToF sensor.

Samsung has officially announced it will release the Samsung Galaxy S20 series of smartphones on February 11.

Next Facebook blames Apple for Amazon Founder’s iPhone getting hacked