The U.S. smartphone market is one of the largest in the world but it is also a very “local” market. There is really no room for much competition because the people already set their minds on the brand they want to patronize irrespective of price or quality. You can call the U.S. smartphone market an “Apple fanboy” and you won’t be far from the truth. However, in a surprising report, the iPhone is not the most popular smartphone in the U.S. A recent report from the US ASCI shows that Samsung Galaxy S20 Ultra is the most popular smartphone among US mobile phone users. 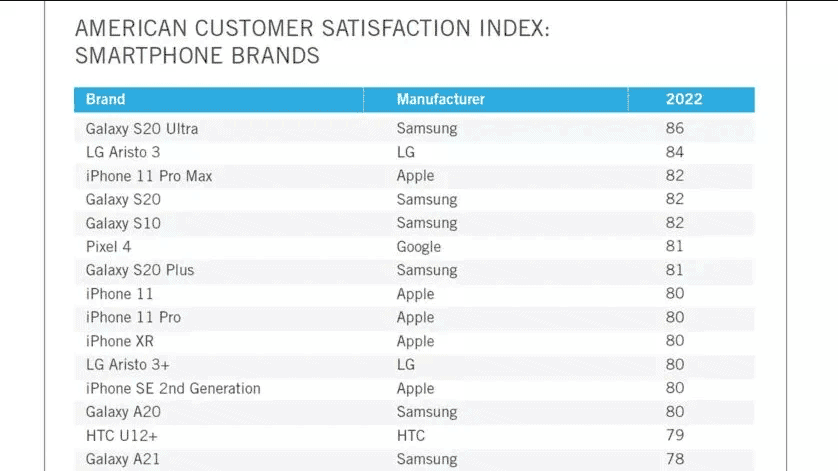 After the Galaxy S20 Ultra, the LG Aristo 3 comes in the second position before we have the iPhone 11 Pro Max in the third position. Samsung then went ahead to claim the fourth, fifth and seventh positions with the Galaxy S20, S10 and S20 Plus respectively. Google Pixel 4 is in the sixth position while Apple claims the last three positions. In the eighth, ninth and tenth positions, we have the iPhone 11, iPhone 11 Pro and iPhone XR respectively,

This device comes with an Exynos 990 (7 nm+) SoC. It uses a 6.9-inch Dynamic AMOLED display that supports a 120Hz refresh rate and 1440 x 3200-pixel resolution. In addition, it has 12GB/16GB of RAM and 128GB/256GB/512GB of UFS 3.1 internal storage. On the rear, it has a quad-camera setup with a 108MP main sensor that supports 8K videos. Furthermore, this device comes with a 5,000 mAh battery that supports a 45W fast charge, 15W wireless charging, and 4.5W reverse wireless charging. Samsung padded the Galaxy S20 Ultra front camera such that it is not much different from the S21 Ultra. Samsung designed the front camera of this device such that it can capture both cropped and full-frame formats. By default, it captures images in its cropped format but this format has images with a lower resolution.

South Korean manufacturer, LG is no longer active in the smartphone market after massive consecutive losses. In fact, for a long time, this brand did not do well in the global market. Nevertheless, it always had a small niche market in the U.S. This is the reason why its 2019 smartphone remains one of the most popular in the U.S.

The LG Aristo 3 remains one of the company’s most decent smartphones and it comes with a 5-inch IPS display. This display supports  16M colours, 2.5D curved glass screen, 294 ppi (pixels per inch) and capacitive multi-touch scratch resistance.

For protection, it uses a Corning Gorilla Glass that makes it very resistant to falls. Under the hood, this device comes with a Snapdragon 425 SoC coupled with up to 2GB of RAM and 16GB of internal storage. The camera department is nothing like we see today. This device uses the good old single rear camera setup. It comes with a 13MP rear camera as well as a single 5MP front camera.

The iPhone 11 Pro Max comes with a 6.5 inch Super Retina XDR OLED that supports 1242 x 2688 pixels resolution and a 60Hz refresh rate. The display also supports HDR10, Dolby Vision, 800 nits (HBM) and 1200 nits (peak). Under the hood, this smartphone uses the Apple A13 Bionic 7nm chip. This device uses 4GB of RAM and 64GB/256GB/512GB of internal storage. On the rear, it has a triple camera setup, all 12MP sensors. It includes a wide-angle, telephoto, an ultrawide angle, and a TOF 3D LiDAR sensor. The battery size is only 3969 mAh and it supports 20W fast charging, and Qi magnetic wireless charging. On the software end, this device comes with iOS 13 out-of-the-box.

The Samsung Galaxy S20 comes with a 120 Hz AMOLED 6.2-inch (1440 x 3200 pixels) Dynamic AMOLED display that supports HDR10+ video. The display also comes with Corning Gorilla Glass 6 for protection. This device draws its power from the Snapdragon 865 for buyers in the U.S. or China. However, buyers in Europe and other markets will have a Galaxy S22 that draws its power from the Exynos 990 SoC. Both versions come in 8GB of RAM and 128GB of internal storage. There is a microSD card slot thus you can expand the internal storage.

The Galaxy S22 also comes with a triple rear camera setup. This device uses a 12MP main camera that supports OIS. It also uses a 64MP telephoto camera that supports 3x optical zoom and OIS. Furthermore, there is another 12MP ultra-wide-angle camera. It is interesting to note that two of the three cameras on the rear support Optical Image Stabilization (OIS). To keep its lights on, this device uses a 4000 mAh battery that supports 25W fast charging, 15W wireless charging, and 4.5W reverse wireless charging.

The Samsung Galaxy S10 is the company’s 2019 flagship series. This device comes with a 60 Hz AMOLED 6.1-inch quad-HD+ (1440 x 3040 pixels) Dynamic AMOLED display that supports HDR10+ video. Under the hood, this device comes with either the Snapdragon 855 or the Exynos 9820. As usual, in China and the U.S., buyers will have the Snapdragon 855 version. However, in Europe and other markets, the Exynos 9820 version will be sold. Both versions come in multiple memory/storage configurations – it has 6GB / 8GB of RAM and 128GB / 512GB of internal storage.

We can see that the U.S. smartphone market is not very diverse and only a small group of brands claim the entire market. We have just Samsung, Apple, Google and LG on a list of 15 most popular smartphones. With LG out of the market, the list even gets shorter.