Xiaomi’s gaming sub-brand Black Shark is gearing up to unveil the next-gen model of its extremely popular gaming series. The Black Shark 3 will go official on March 3. The handset will boast Qualcomm’s latest Snapdragon 865 SoC with 5G connectivity. Since we’re just a few days away from the release, it’s natural to see teasers and leaks popping out everywhere. The Black Shark 3 apparently will honor the company’s legacy of powerful phones. If there is any doubt about that, the AnTuTu benchmark score of the Shark 3 Pro has been shared online to put such doubts to rest.

A screenshot of the total score of the gaming smartphone was shared by no other than Black Shark’s CEO on his official Weibo page. The device bears blackshark SHARK MBU-Ao and going by its GeekBeench appearance, it’s the high-end Black Shark 3 Pro 5G. It will launch alongside the vanilla Shark 3. The device scored 620,952 points which is undoubtedly the highest score recorded so far by any smartphone on the platform. Before now, the iQOO 3 was reputed to have the highest score at 597,583 points. The ROG Phone 2 was a follower with its 507,051 points. 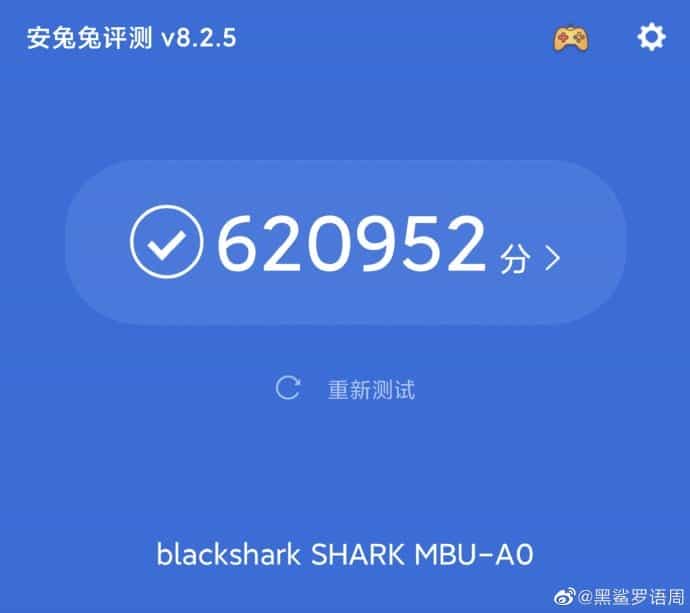 Worth noting that all three models with insane AnTuTu scores are gaming smartphones. Although the iQOO 3 and Black Shark 3 series boasts the same Snapdragon 865 chipset onboard other flagship models like Galaxy S20 and Xiaomi Mi 10, the clocking speed may be considerably higher. This could reflect directly into the final score which is far superior to the referred models. However, the Black Shark 3 Pro’s score alone is simply amazing.

The Black Shark 3 and 3 Pro 5G will go official in just a few days on March 3. The company already opened pre-registrations in China. We will know all the details about the Snapdragon 865-powered phones soon enough.

Next Realme 6i Surfaces on FCC Listing, Specs and Images Revealed