It’s not a secret anymore that Lenovo will enter the gaming smartphone segment this year. The announcement was made a few weeks ago and it was revealed that the smartphone will launch under the Lenovo Legion gaming brand. Today, a new poster has been released and it teases the phone’s fast charging technology. High-speed charging technologies are among the hottest trends in the industry right now, so it makes perfect sense for Lenovo to equip it on the Legion phone.

A rough translation of the words on the poster asks “Is 55W fast charging really enough?”. Apparently, Lenovo is taking a jab at iQOO 3 5G that launched today. The phone in question launched with 55W fast-charging support. 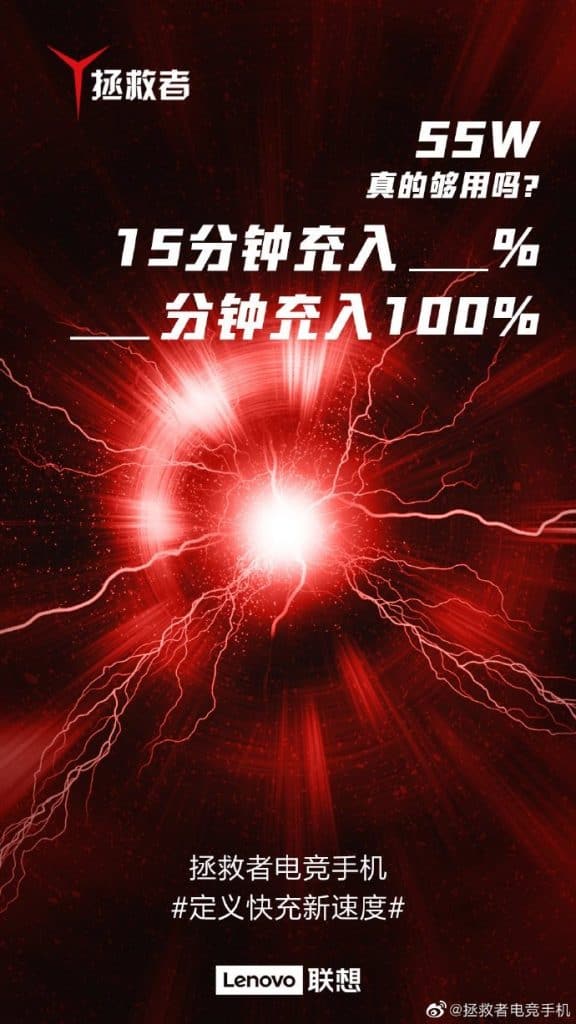 Based on the above, one can deduce the Legion Gaming smartphone will have support for fast-charging that goes beyond 55W. After all, if that amount isn’t enough, we assume that more should be adequate. The other text on the poster asks fans to guess what the battery level will be after charging for 15 minutes and also how long it will take to reach 100%.

So far, 65W is the highest power rating we have seen on a commercially available smartphone. Since the poster doesn’t ask if 65W is enough, we are sure that the power rating won’t go beyond it. Worth noting that 65W charging tech is expected to make a debut in a few days ahead through another gaming device, the Black Shark 3. We are curious to see how Lenovo will respond to the competition with the Legion handset.

The Lenovo Legion will sport Snapdragon 865 and we assume that it will also pack 5G connectivity. The handset will launch initially in China, but may also reach global markets in the future.