Its been about a month since the release of the Xiaomi’s latest flagship series – Xiaomi Mi 10 series. Now, a recent speculation suggests that this series will add a new model pretty soon. According to the report on Weibo (Digital Chat Station), the “Super Cup” Xiaomi Mi 10S will arrive in the second half of the year. Well, it will only launch if everything goes according to schedule. In addition, the report claims that the Xiaomi Mi 10S will launch after the release of the new MIX series. The MIX series is known for arriving in September or October thus this device may launch in November or December. 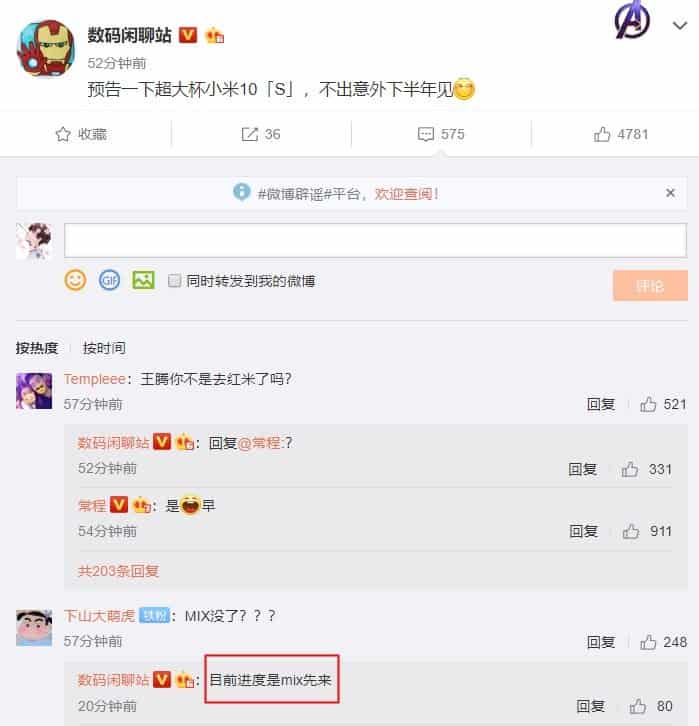 This is the first time that we are hearing about a Xiaomi Mi 10S. As of now, we can not verify this information, thus, it is best to take it with a grain of salt. It has been a pretty long time since Xiaomi launched a digital series with the suffix “S”. In fact, the last is the Xiaomi Mi 5s which arrived in September 2016.

Analysts believe that if this device exists, it should be a bit higher than the Mi 10. There are speculations that it should use the upgraded version of the Qualcomm Snapdragon 865 processor, and it will continue the Xiaomi high-impact route.

Furthermore, Xiaomi’s development of flagship devices this year will not end with the Mi 10S. There are reports that the Xiaomi Mi MIX Alpha’s Snapdragon 865 upgrade project has begun. The previous Mi MIX Alpha comes with a Qualcomm Snapdragon 855 Plus processor. It uses 12GB of RAM, 512GB of internal storage, built-in 4050 mAh battery, and supports 40W wired flash charge. The SD855 Xiaomi Mi MIX Alpha is yet to hit the market. Thus, its quite surprising that a Snapdragon 865 upgrade project is on the way.

What do you think about the report on the Xiaomi Mi 10S? Do you think this is a good move from Xiaomi? Let us know your thoughts in the comment section below

Xiaomi Mi 10 series may have a new Snapdragon 870 model