Over the past few days, there have been a couple of reports regarding the OnePlus 8 series. Yesterday, we saw a real image of the OnePlus 8 in Robert Downey Jr. “Iron Man” hands. Later the same day, there was a poster that claims that this series will be released on April 15th. This is the first time that we are getting an exact launch date for this series. However, the date is still a leak and nothing is official for now. Now, the latest render of the OnePlus 8 Pro just hit the web. The render is probably based on the plethora of information available on the web. 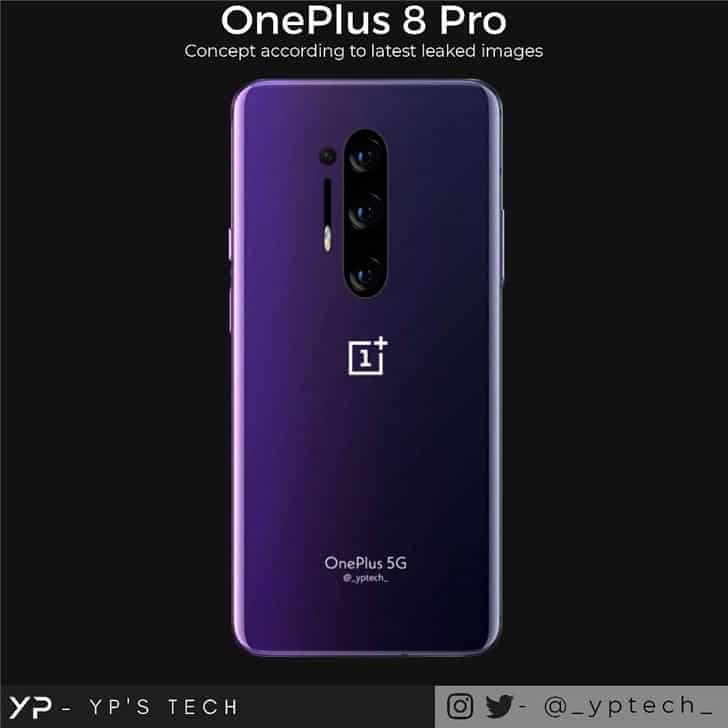 So far, the renders of this smartphone seem to be consistent with the OnePlus 8 real image. This device uses a quad-rear camera set up in a vertical alignment. Three sensors are arranged in the center while the fourth sensor is the side. Camera. Below the single sensor on the side is the LED flash. At the same time, the OnePlus logo is beneath the triple camera array while the “OnePlus 5G” text still appears below. Overall, this smartphone comes with a curved body design.

According to speculations, the OnePlus 8 Pro will come with a 6.65-inch AMOLED screen with a 120Hz refresh rate. This smartphone will use the latest Qualcomm Snapdragon 865 SoC and Adreno 650 GPU. There will be four cameras on the rear as well as a ToF sensor. Its 4500 mAh battery supports 10V 5A ultra-fast charging and also supports 30W wireless fast charging.

In order to prepare itself for the technology 5G era, OnePlus will invest nearly $30 million for 5G research and development. The company has officially confirmed that the OnePlus 8 series will support 5G network. However, if there is a Lite model, it will probably stick with LTE.