According to recent leaks, Samsung is gearing up to launch a new low-end smartphone dubbed Galaxy M01. This new entry for the M-series will come at a very affordable price tag and instead of the usual Exynos chipsets will boast a Qualcomm’s Snapdragon 439. The handset was spotted at GeekBench with 3GB of RAM and Android 10. Despite the low-end chip it seems to be a capable smartphone if it comes for the right price. Now, we got a new piece of evidence that the device is nearing the shores. 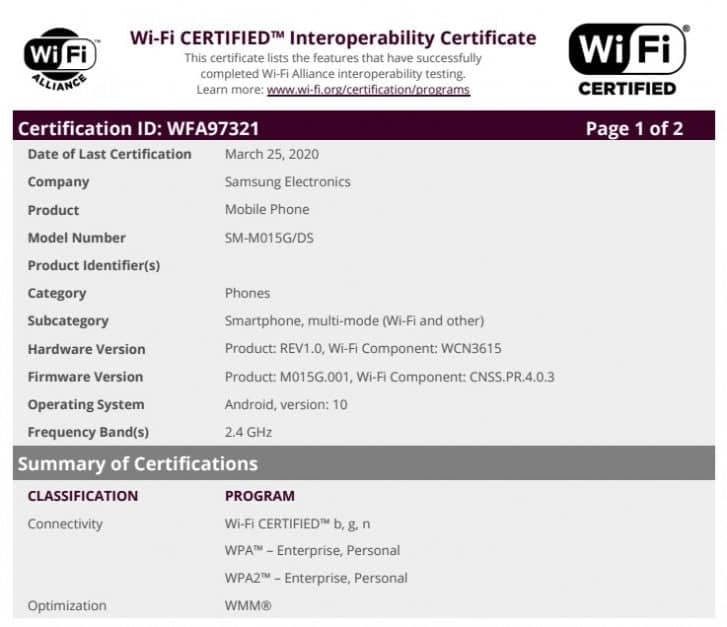 The new affordable device decided to pay a visit to the Wi-Fi Alliance. The device got all the necessary certifications from the agency and seems to support Wi-Fi b/g/n standard. Moreover, the new certification also confirms that we have Android 10 in tow, which also implies the presence of Samsung’s One UI 2.0 interface. The device in question appears with SM-M015G/DS model number. The DS in the name suggests Dual-SIM functionality which wouldn’t be a surprise in a device of this category.

According to SamMobile, this new smartphone could be just a new variant of the Galaxy A01. This particular device will come for emerging markets such as India, Sri Lanka, Nepal, and Russia. Unfortunately, no much is known about the Galaxy M01 at the moment. But the sole fact that it got Wi-Fi Alliance certification points at an imminent release.