Samsung has not yet presented the Galaxy A21, and it is already known that the Galaxy A21s will also appear on the market. And although it is difficult to say when exactly this will happen, we will certainly be looking forward to it. For now, everything indicates that it will be the first smartphone of the South Korean manufacturer with the new Exynos 850 processor.

Interestingly, the first reports about this model have appeared already at the end of January 2020, even before we began to talk about the Galaxy A21. Logic and experience from the past suggest that the latter will debut first, and only later will the Galaxy A21s see the light of day. However, we are waiting for it with undisguised impatience and curiosity.

Samsung Galaxy A21s – what do we already know?

The first information that appeared about this smartphone was not particularly revealing too much. They reported that this model will have a macro camera with a resolution of 2MP, which – looking at the last models of the Galaxy A series – seemed almost obvious. By the way, we also learned that the Galaxy A21s will offer from 32 GB to 64 GB of built-in memory with the possibility of expanding with a microSD card, and it will also be available in four colors: black, white, blue and red.

A few weeks later, there were further reports about the Galaxy A21s. The smartphone will arrive with a battery with a capacity of up to 5000 mAh. A similar battery is available on the recent Galaxy A31 and Galaxy M11. 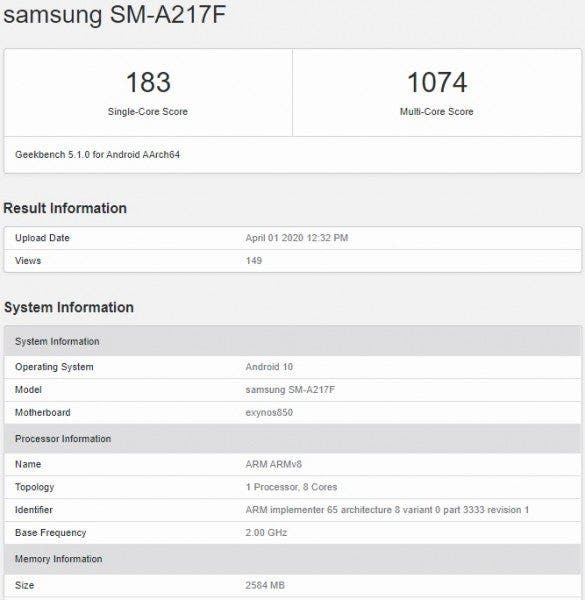 Now, however, we are dealing with something really interesting. A smartphone with model number SM-A217F has been found in the Geekbench database. It will debut on the market as Galaxy A21s. The benchmark reveals that the smartphone was will arrive with an all-new Exynos 850 processor, consisting of eight cores. This SoC has not yet presented, so this model is likely to be the first device with it on board.

Unfortunately, Geekbench does not give a detailed specification of Exynos 850, but only the basic clock frequency (2.0 GHz). It also does not tell us much and does not necessarily match the specifications presented by Samsung. However, this will be the next-generation chip for mid-rangers and will probably bring support for 5G connectivity.