Back in November last year, Xiaomi took the wraps off Mi Note 10. It was a return to the successful lineup of smartphones that had a long hiatus. The handset came with upper mid-range specifications, but a premium price tag. After all, it was the company’s first smartphone to land on the 108MP camera terrain. It was also the first smartphone in the industry to feature a sensor of this kind. Several months after the release of the original phone, the company is preparing the terrain for a new Mi Note 10 Lite variant. 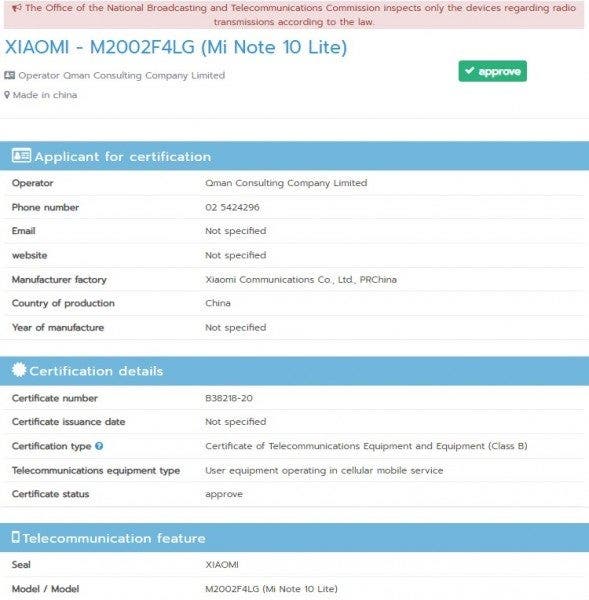 Now, the device seems to be nearing the shores since an alleged Mi Note 10 Lite, sporting M2002F4LG model number was certified by Thailand’s NBTC. Unfortunately, the listing doesn’t bring us many details about the phone’s internals. However, it has passed through FCC last month and there we can find some interesting details about the specs.

First of all, the smartphone will be powered by the Snapdragon 730G SoC just like its vanilla sibling. We believe that this processing power may come along with 6GB of RAM and 120GB of storage. But a minor variant with 4GB RAM and 64GB storage isn’t discarded. These specifications are built around a 6.47-inch FullHD+ AMOLED panel. The handset draws power from a massive 5,260mAh battery with 30W fast-charging support. Until now, we have a phone that is pretty much similar to the regular Mi Note 10.

The first “real” changes start to appear in the camera department. The handset features a Penta-camera setup on the back. However, gone is the 108MP camera. Instead, we have a 64MP main sensor paired with two 8MP units plus a 5MP and 2MP modules. Worth noting, that the phone won’t come with a laser auto-focus feature. Moreover, the phone will ship with Android 10 and MIUI 11 straight out of the box. The original Note 10 came with Android 9 Pie.

Unfortunately, there are still no details about the phone’s availability. But considering the number of certifications it is passing we assume that the launch is near.