After launching Realme Band and Realme Buds Air, the Chinese smartphone maker will soon add yet another lifestyle product to its portfolio. This time we’re looking at a range of smart televisions. Since the last couple of months, we’re hearing a lot of different reports on Realme TV lineup. After making its way to the BIS listing, the smart TV has now appeared on the Bluetooth SIG certification listing. 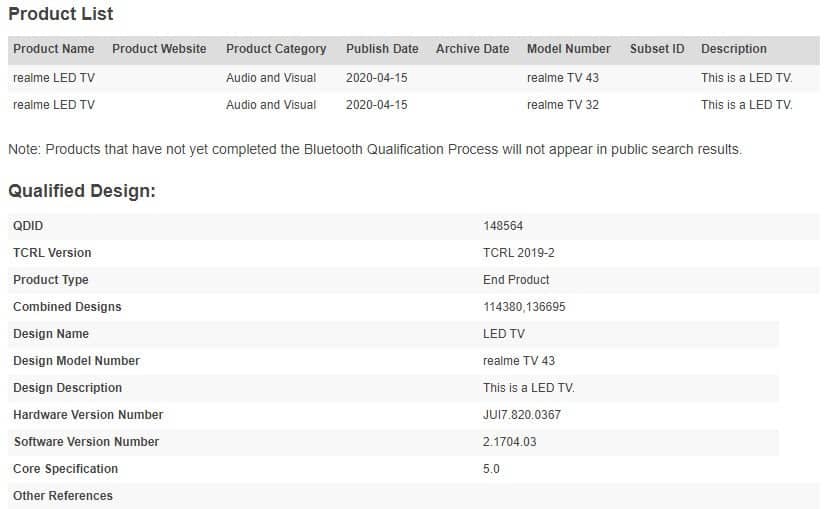 As expected, the Bluetooth SIG listing of the product delivered some key features along with possible screen sizes. Looking at the listing, we can say that there is going to be at least two Realme TV models in the near future. We’re looking at a 43-inch variant and a smaller, 32-inch offering. Both the smart television will come with an LED panel and a software version number 2.1704.03. Sadly, the listing doesn’t mention anything else.

Apart from these two, Realme might also launch a premium offering with the model number JSC55LSQLED. As you might have guessed, it will arrive with a 55-inch QLED display panel and might compete with the OnePlus TV. Moving on, the 55-inch premium offering has already appeared on BIS listing along with a 44-inch Realme TV.

On a related note, Realme Remote recently got certification featuring Bluetooth 5.0, battery-support and a 4.0 host controller interface. If Realme TV succeeds, the smartphone maker might end up bringing its first-ever notebook laptop. This clearly suggests that the brand wants to evolve as a technology-lifestyle brand in the near future.

Considering the BIS listing and sudden appearance on Bluetooth SIG, the official launch might happen in the coming months. With that said, we should be hearing more about the portfolio in the coming days. It is also worth mentioning that the launch could be pushed back looking at the on-going coronavirus outbreak.

Next Meizu 17 Pro gets 3C certification: confirms up to 40W fast charge