On April 15, Sony Spain’s official Twitter confirmed that the Xperia 1 II will be listed later this month, priced at 1200 euros.

In terms of core configuration, the Sony Xperia 1 II uses a 6.5-inch 21:9 4K HDR OLED fish screen with a resolution of 3840 × 1644. Under the hood, it carries the Qualcomm Snapdragon 865 flagship platform. There is also up to 8GB memory and 256GB storage. The front-facing camera has an 8MP resolution. The battery capacity is 4000mAh and supports IP68 dustproof and waterproof.

One of the biggest selling points of this handset is considered to be the rear camera. The Sony Xperia 1 II has three 12-megapixel rear-mounted lenses. The 12-megapixel main camera uses an IMX557 sensor with a 1/1.7-inch photosensitive area and a native 1.8um large pixel. It supports dual PDAF and optical image stabilization. The ultra-wide lens with an effective focal length of 16mm is the Sony IMX363. And the telephoto uses the Samsung S5K3T2 sensor, which also supports PDAF. 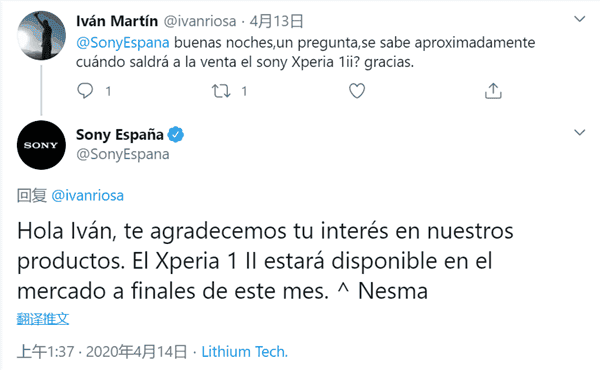 It is worth noting that the Sony Xperia 1 II lens adopts Zeiss T* coating technology. It also comes with real-time tracking eye focus instead of the past eye focus. There are also real-time exposure and focus tracking functions.

In addition, the Sony Xperia 1 II retains the 3.5mm headphone jack. It comes with dual stereo speakers and DSEE Ultimate upscaling technology. The latter can use AI to automatically increase the audio frequency and bit rate in real-time, making each audio track close to high-resolution audio.