Vivo’s iQOO is gearing up to release a new smartphone that will leave behind the bad impression caused by the iQOO 3. The new handset dubbed iQOO Neo 3 will not only pack the Snapdragon 865 SoC but aims to be the cheapest smartphone to have it. Today, the upcoming device has made its way to the AnTuTu benchmark achieving an unusual score of 608,801 points. The variant used in the tests has 8GB of RAM and 256GB of UFS 3.1 storage. 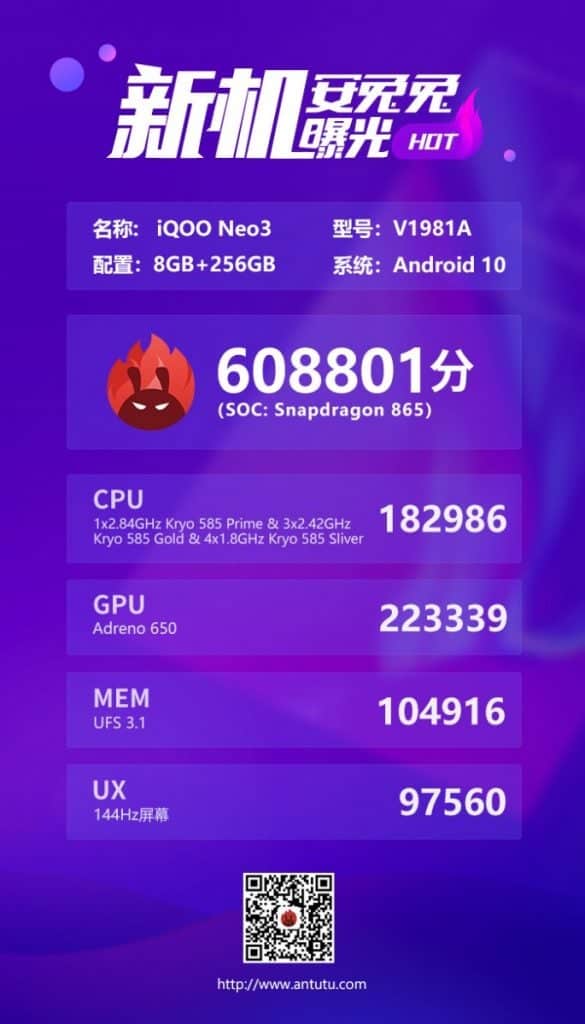 Worth noting that this still isn’t the highest score achieved by a smartphone. However, it’s enough to show how powerful the smartphone will be. According to reports, the handset will cost around $425 and will be a direct competitor to the Redmi K30 Pro. However, there’s a major difference that puts the iQOO Neo 3 miles forward. It has a 144Hz refresh rate, while the Redmi K30 Pro is capped at 60Hz.

Until now, only the Nubia Red Magic 5G was walking through the 144hz terrain. However, it’s not in the same price range as the iQOO Neo 3. Every other device has either a 90Hz or 120Hz display. This display will come with an adaptive refresh rate, thus allowing the phone to automatically adjust the refresh and touch rate accordingly with the app or game you’re running.

Moreover, the panel makes use of Qualcomm’s LTM technology. It boosts the darker parts of an image to improve visibility under bright sunlight. The iQOO Neo 3 is packed with advanced specifications and features that it’s so hard to believe that it won’t be price high as other flagships. The handset will go official on April 23.

Previous Get your own $30 coupon for the new ELEPHONE E10

Next Honor 20E launched in Italy, It's a rebranded Honor 20 Lite