Meizu Technology held the Meizu 17 mSmart 5G fast and stable technology sharing meeting yesterday. The company officially released the Meizu mSmart 5G technical solution. The theme of this meeting is “born to solve the pain points of 5G”. According to Meizu, this technology solves one of the impacts of 5G on equipment which is battery life issues. 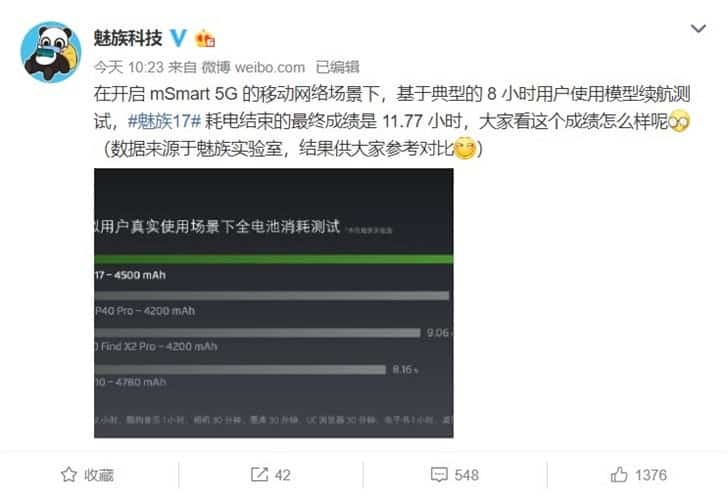 Meizu revealed that Meizu 17 comes with a large 4500 mAh battery. Over an 8-hour 5G battery life test, the power saving effect is as high as 64% when mSmart 5G is active. Today, Meizu took to Weibo to announce that “in the mSmart 5G mobile network scenario, based on the typical 8-hour user endurance test, the final result of Meizu 17’s power consumption is 11.77 hours”.

The company believes that this is better than what its competitors offer. The likes of Huawei P40 Pro, Oppo Find X2 Pro and Xiaomi Mi 10 do not offer as much. However, we should note that the battery capacity of the first two is smaller while the Xiaomi Mi 10 is larger than Meizu 17.

When it comes to battery life, both Meizu 17 / Pro charging heads have passed 3C certification. The certification shows that the former supports 30W fast charging, and the latter 40W. According to the current information, Meizu 17 will come with a Snapdragon 865 5G processor, LPDDR 5 memory, UFS 3.0 flash memory. Furthermore, the display is a 6.5-inch 90Hz AMOLED screen with an optical on-screen fingerprint sensor. This smartphone comes with a quad-rear camera and a 4500 mAh large battery capacity. It also comes with a horizontal linear motor, dual stereo speakers and other configurations.