Vivo’s sub-brand iQOO is gearing up for its upcoming launch where the company will announce its much-awaited iQOO Neo 3. If you’re unaware, the smartphone will see its official unveiling tomorrow in China. The device has already been a part of numerous leaks and teasers revealing information bit by bit. Surprisingly, none of the previous developments revealed the battery capacity and charging tech until now. 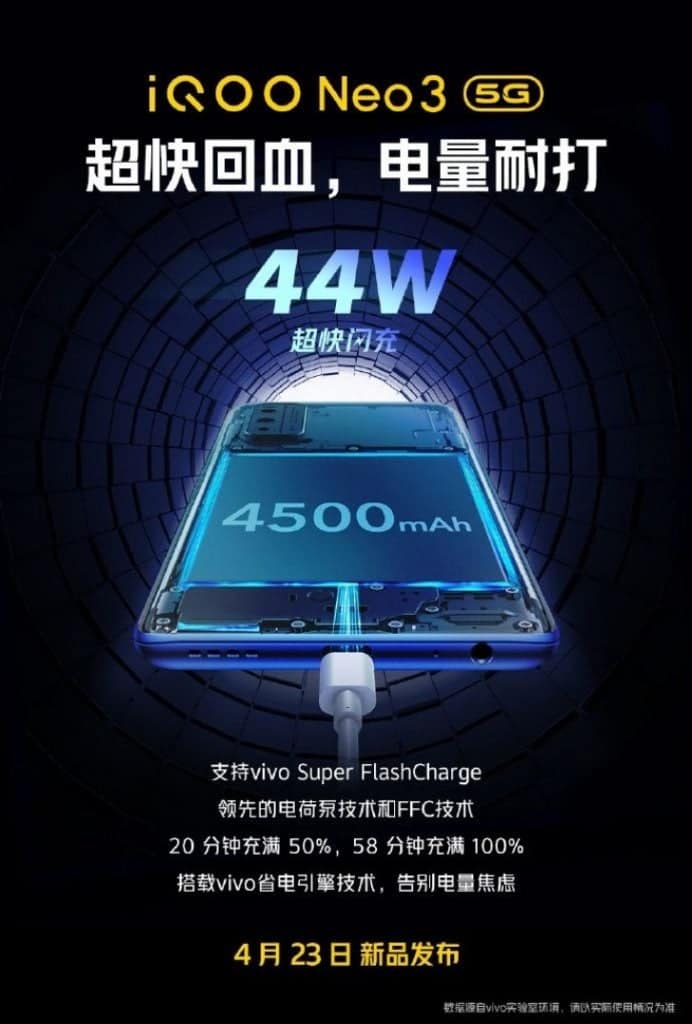 iQOO recently posted a new teaser on its official Weibo channel revealing some key information along the way. This time we finally know about the battery capacity and the charging tech. As per the teaser, the all-new device will pack a solid 4,500mAh battery inside. Furthermore, the device will come with 44W charging support as well.

The battery can charge from zero to half in just 20 minutes with a full charge happening in 58 minutes. With the battery specs cleared, we are now left with the detailed camera specs and of course, pricing and availability. With one day left for the launch, it seems like we will be hearing more straight during the unveiling.

iQOO Neo 3 is expected to arrive with an LCD panel with a punch-hole cutout for the front snapper. The display will also come with a high refresh rate of 144Hz. Under the hood, the phone will run on Snapdragon 865 chipset paired with 8GB RAM and 256GB UFS 3.1 storage. We should also see a 128GB internal storage variant as well.

Since we’re looking at an LCD panel, we should see a physical fingerprint sensor either on the back or on the side. Powered by 4,500mAh battery, the device will run on the latest Android 10 operating system. In terms of pricing, a previous leak suggests a tag of CNY 2,998 (i.e. $425). This means that it will directly compete with the Redmi K30 smartphone.