Earlier this year, Realme forayed into the wearable space with its first-ever fitness tracker dubbed Redmi Band. Just like any new product, the fitness tracker was missing some key software-based features. Well, the Chinese smartphone maker has now finally added them by rolling out the first major update. 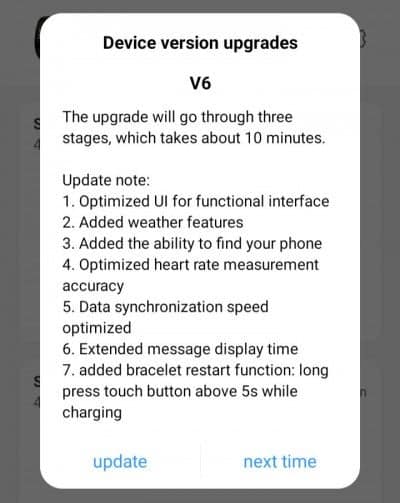 The Realme Band has now started receiving the first major update from the company. The new update adds two key features namely Weather Info and Find My Mobile to the wearable. With the new firmware rollout, the software version bumps up to v6.0. Apart from the two key additions, the new update also adds the reboot option.

Apart from these, the update has added numerous improvements as well. We’re talking about things like optimized user interface, optimized heart rate sensor and optimized data sync speed. You can find the complete changelog in the image above.

Realme Band comes with a 0.96-inch colour display having a capacitive button. The display shows information such as calls, notifications, messages, reminders and other third-party app notifications. The band also consists of five watch faces that you can make use of. Furthermore, the company will keep on adding more face designs every now and then.

In terms of hardware, we’re looking at heart rate sensor which can measure your pulse periodically. When the watch band is removed, you will see the charging connecter that can be used with regular USB Type-A port. The band takes around 2 hours to charge completely and can last for 10 days on a single charge. The band is IP68 certified meaning it can withstand splashes of water.

Next Mi Note 10 Lite will be announced on April 30