Оn Wednesday, Counterpoint Research released the latest data concerning the smartphone sales in the first quarter. It turns out China’s smartphone sales fell by 22% year-on-year. Moreover, sales in February were particularly bleak. The demand for this month was higher than last year. It has dropped by 35%. However, in the first quarter of 2020, Apple’s iPhone sales in China fell by only 1% year-on-year. But the iPhone 11 still leads the market.

In terms of specific share, in the first quarter of 2020, the top five domestic smartphone manufacturers were Huawei, VIVO, OPPO, Apple, and Xiaomi. Interestingly, Huawei’s share was as high as 39%. 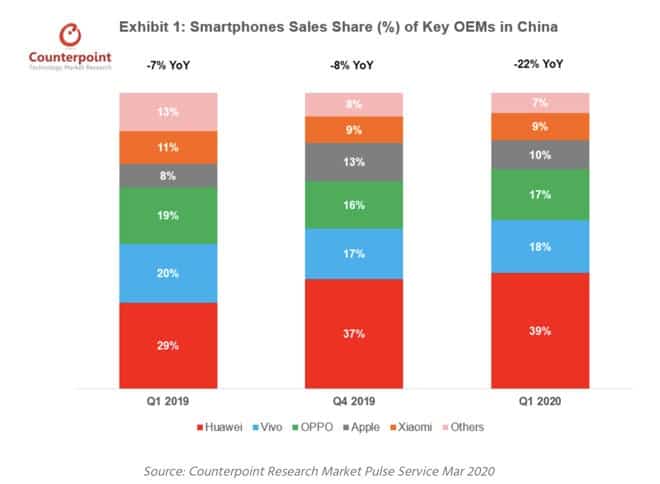 It is worth mentioning that the iPhone 11 was the best-selling smartphone in the Chinese market in the first quarter. It has been ranked first in China’s best-selling model list for seven consecutive months.

Both Apple’s and Huawei’s market share increased over the same period last year. The performance in the first quarter of 2020 was significantly better than the overall market. Huawei’s smartphone sales achieved a 6% year-on-year increase. iPhone’s sales fell only slightly by 1%. Their rivals suffered a double-digit sales plunge. 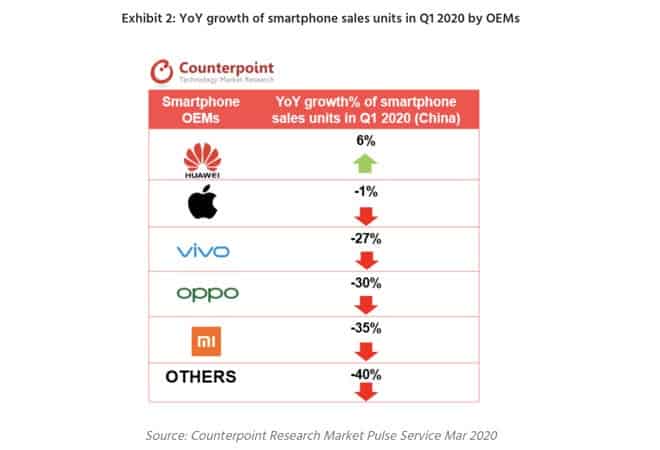 Counterpoint noted, ’we also estimate that the online share of smartphone sales in China surged to over 50% during Q1, from about 30% in 2019.’

As for today, two other market research companies, IDC and Canalys, released their reports concerning the global smartphone market. And though Samsung still leads the market, Apple was among those top brands that suffer too little during this period. By the way, Apple ranked third and its shipments fell by 8% year-on-year to 37 million units.