Just recently, we wrote about data coming our way from IDC and showing that the global smartphone shipments fell by 11.7% in the first quarter of 2020. But besides IDC, there is another market research company, which provides relevant data as well. As you guess, we are talking about Canalys. So, according to its numbers, the global smartphone market saw a decline of 13%. As the numbers differ a lot, we decided to take a closer look at the research data of this company. 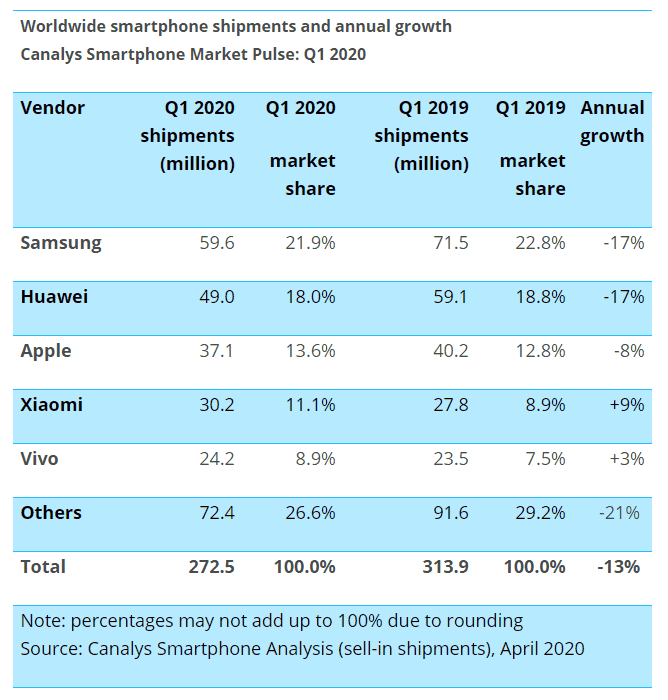 At the beginning of 2020, the global smartphone market performed well, and has achieved growth for two consecutive quarters. Canalys senior analyst Ben Stanton said, ‘Smartphones are still a necessity for most people, and device availability in online channels has enabled those who need to replace a broken or lost phone to do so. But many customers who would have bought a new smartphone as a luxury have delayed that purchase.’

What Do Canalys Researchers Think About Global Smartphone Market?

Canalys analysts pointed out that few smartphone manufacturers can withstand the current impact. Because manufacturing operations are concentrated in South Korea and Vietnam, Samsung was in a strong position in February. However, with the global spread of the epidemic, such advantages soon disappeared. Due to the strong sales of the iPhone 11 earlier this quarter, Apple is one of the less affected manufacturers. In addition, Apple’s recent launch of the new iPhone SE has important strategic significance, which can ensure iPhone shipments while users wait for 5G flagship devices. Huawei’s overseas shipments plunged 35%, the company launched the first P40 smartphone without Google mobile services integration. However, channel vendors are worried about these untested products. So the initial channel orders are lower than Huawei’s expectations.

According to Canalys report, the epidemic has also had a huge impact on smartphone sales channels. In regions such as Europe where strict segregation measures are implemented, omni-channel retailers are trying their best to transfer offline inventory to online channels. But they have paid huge costs for this. These retailers’ warehousing, transportation, and delivery capabilities are not yet fully prepared for online transfer. This also affects their demand for purchases from suppliers and distributors. Canalys analysts expect that in these regions, e-commerce channels will have a clear advantage in the coming weeks.