By region, in the first quarter of 2020, the Chinese market saw the largest decline, with shipments falling by 20.3% year-on-year. Since the Chinese market accounts for almost 1/4 of global shipments, it has a huge impact on the entire smartphone market. Also, the global market’s reliance on China’s smartphone supply chain also poses problems. The US and Western European markets fell 16.1% and 18.3% year-on-year, respectively.

IDC research director Nabila Popal said: ‘What started as primarily a supply-side problem initially limited to China has grown into a global economic crisis, with the demand-side impact starting to show by the end of the quarter.’

As expected, China’s supply chain began to recover at the end of the quarter. But major global economies have entered complete segregation, leading to the suppression of consumer demand. During this period of strong uncertainty, consumers are becoming more and more cautious in terms of spending. So it is difficult to believe that the purchase of smartphones will not be affected. The decline in demand, coupled with the closure of retail stores around the world, has caused a serious impact on all consumer-grade device markets, including smartphones.

IDC researchers also said that as new cases of new coronavirus began to slow, demand in the Chinese market in March was better than expected. However, the recovery in March was mainly due to the suppression of previous demand. This rebound is unlikely to continue because the global economic downturn is also expected to affect China and consumer sentiment. It is expected that only the fourth quarter of this year may achieve year-on-year growth.

In terms of the top five manufacturers, Samsung shipped 58.3 million smartphones in the first quarter, down 18.9% year-on-year. However, Samsung still ranked first with a market share of 21.1%. Samsung launched the high-end flagship Galaxy S20, and the A-series phones continue to be successful.

Huawei’s shipments fell 17.1% year-on-year but ranked second with a market share of 17.8%. Huawei reduced prices in advance for the Mate 30, P30 series, and the Honor V30 and 9X series. At the same time, it promoted the diversified layout of online and offline channels to cope with the downward impact of the market. 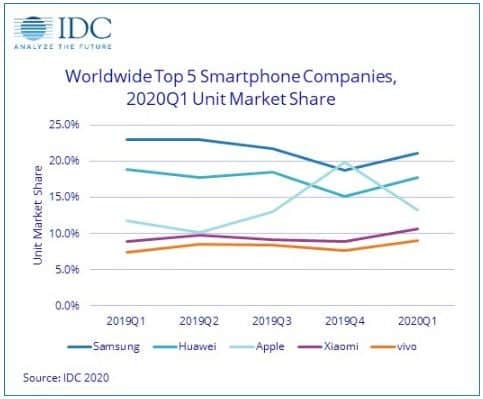 In the first quarter, iPhone shipments were 36.7 million, with a market share of 13.3%, ranking third. Apple’s shipments fell only 0.4% year-on-year, the smallest drop among the top three manufacturers. This is mainly due to the continued success of the iPhone 11. Looking ahead, if the economic situation causes consumers to prefer low-priced products, the new iPhone SE recently launched may become a great help.

Xiaomi’s shipments increased by 6.1% year-on-year, and its market share exceeded 10% for the first time. In India, before the start of full isolation, Xiaomi launched new Poco and Redmi products.

VIVO’s market share this quarter was 9.0%, re-entering the top five. Its shipments were increased by 7.0% year-on-year, the highest growth rate among the top five. The success of Vivo’s low-end Y-series and S-series phones in India is a key driver.

Previous Google Pixel 4a: the first camera samples are leaked