After unveiling Redmi Note 9 globally in April, Xiaomi is now looking to bring the budget Note lineup to the Indian market. We have already heard numerous leaks and rumours pointing towards a nearing Indian launch. Well, another development in the story has further solidified the fact that the device is inching closer to the Indian launch.

An Indian variant of the Xiaomi Redmi Note 9 has now surfaced on the WiFi Alliance listing. As per the listing, the device will come with Android 10 and dual-band WiFi connectivity. Since the device is already official, we know everything about it including these two aspects. 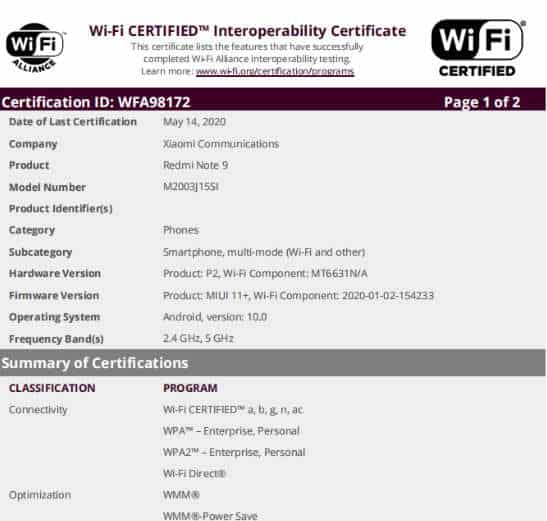 Since non-essential items restriction has now been lifted in parts of the country, smartphone makers are now launching their long-delayed products. With that said, we should be hearing more about the Indian launch in the coming days.

To recall, Xiaomi Redmi Note 9 is equipped with a 6.53-inch IPS LCD panel with 1080 x 2340 pixels. The display comes with a punch-hole cutout housing the front selfie sensor. Under the hood, we’re looking at a MediaTek Helio G85 chipset with up to 4GB RAM and 128GB onboard memory. If that’s not enough, you can always upgrade it via microSD card.

Just like most devices out there, there is a quad rear camera module featuring 48MP primary sensor, an 8MP ultrawide lens and two 2MP sensors. For selfies and video calling, there is a single 13MP front snapper. All of these gets its juice from a 5,020 mAh battery with 18W fast charging support. Other features include Android 10, Bluetooth 5.0, dual-band WiFi and infrared sensor.