Back in March ZTE revealed the Axon 11 5G as a low-cost version of a smartphone that is coming on June 1. The company confirmed through its Weibo account that this new device is dubbed ZTE Axon 11 SE and will official in the next Monday. However, it will be exclusive to the Chinese market for some time. 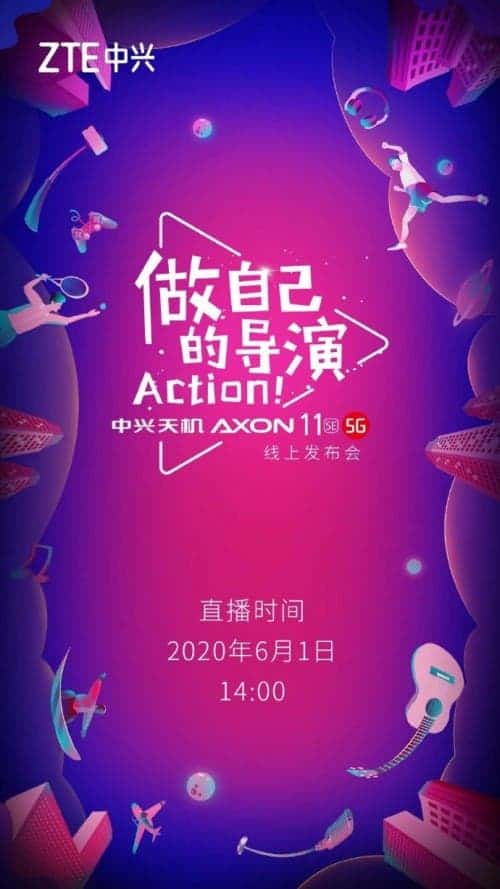 The company revealed a poster with “Lights, camera, action” tagline suggesting advanced camera capabilities in the new handset. Unfortunately, there is no official information regarding specs, but a recent TENAA listing can clear the things a little. According to previously leaked details, the new handset will sport MediaTek’s Dimensity 800 5G SoC. The performance offered by this chipset is slightly similar to what Qualcomm is offering with Snapdragon 765G, although phones MediaTek solutions will probably be more cost-effective.

The new handset aims the younger audience, so it will probably be cheaper than its sibling. TENAA revealed a 6.53-inch display with FHD+ resolution and a punch-hole selfie snapper. This panel is of the LCD kind, so there won’t be an in-display fingerprint scanner on this handset. Moving around to the back, we have a Quad-camera arrangement comprising a 48MP main camera, 8MP ultrawide, and a 2MP sensor that could be either a depth sensor or macro camera. Unfortunately, the fourth sensor’s specs are still unknown.

ZTE will offer the ZTE Axon 11 SE in different versions with 6GB or 8GB of RAM and 64GB, 128GB, or 256GB of internal storage. The phone ships with Android 10 straight out the box, and we can expect ZTE’s MiFavor UI to be running atop. The battery is a 3,900mAh, but that’s a decent amount considering that this chipset is made on a 7nm process. Below you can check the official specifications of the current ZTE Axon 11. As we said, the newer version will probably be cheaper but won’t sacrifice the performance.

After the Axon 11 SE, we believe that the next step given by the company will be releasing a Pro variant with proper flagship specifications.

Next ByteDance has become the world's most valuable startup