Following growing tensions between China and its Southeast Asian neighbor India, a mobile application developed in Jaipur has just been available on the Google Play Store under the name “Remove China Apps ”.

As its name suggests, the app detects applications of Chinese origin present on the user’s device, and then offers the latter a button to uninstall them, without giving any apparent reason for this.

However, the app is free and weighing only 3.5 MB, it quickly became No. 2 in the Indian Play store with an overall rating of 4.8 stars for more than 1 million of downloads.

For the moment, “Remove China Apps” is reserved for the Android platform and is only available in a few Asian countries for the moment. It is nevertheless possible to have it via the installation of its .apk file. 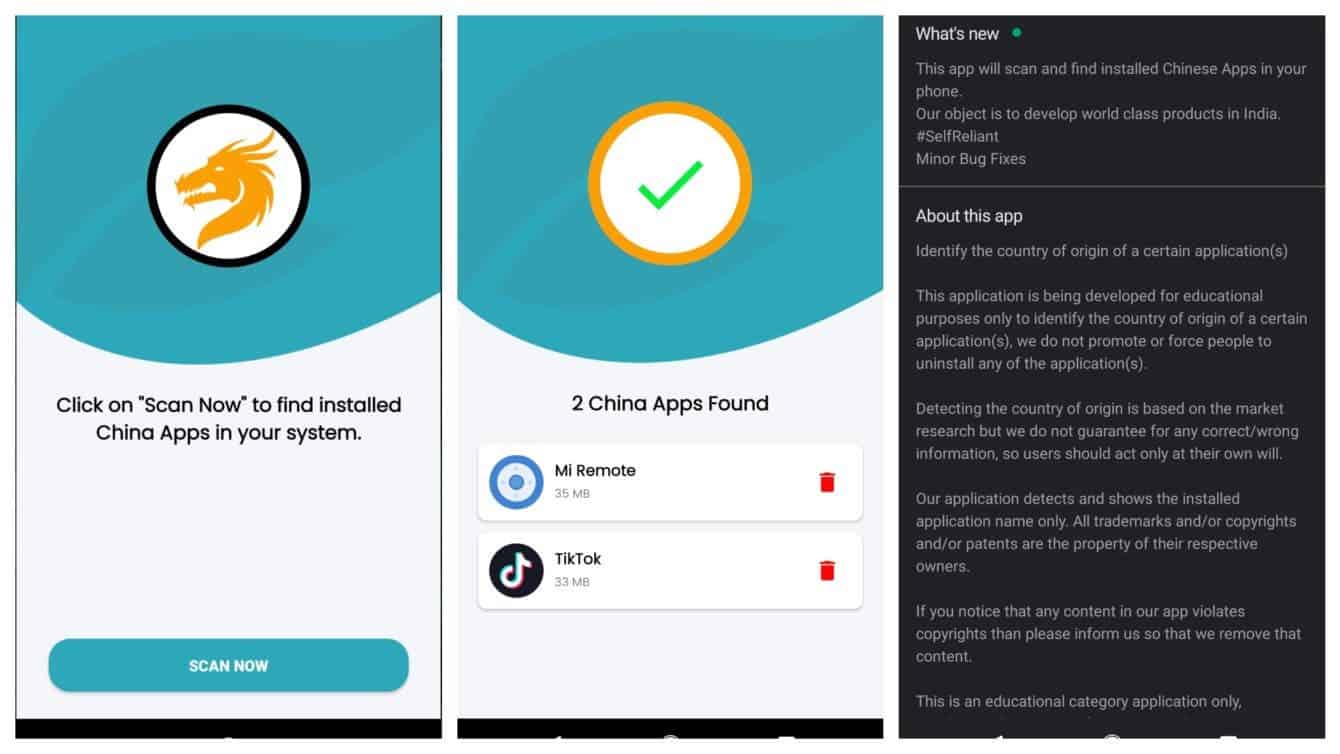 It is worth to mention that recently, there was a battle between TikTok and YouTube video platforms. The Chinese social media is breaking records continuously and this isn’t pleasing YouTube fans. In a new advancement, TikTok & YouTube users are giving 1-star reviews to each other’s app in the Play Store. Everything started with YouTube’s controversial decision of deleting the viral video of Carry Minati’s “YouTube vs TikTok – The end”. In it, he roasted the Chinese social media.

YouTube creators are moving against TikTok creators which also fought back. However, the situation has quickly escalated after the video published by Carry Minati. The video became viral in India breaking several records during its first week. The video got a massive amount of likes and dislikes. After amassing over 74 million views in 7 days, YouTube deleted the video. The streaming platform made its decision after many complaints from TikTok users. According to YouTube, the video went against the privacy policy and was also violating the terms & conditions imposed by the platform. As a result, Carry Minati’s followers are promptly responding with a wave of 1-star reviews on the TikTok App in the Play Store. Yeah, this seems like the most reasonable way to fight against YouTube’s decision, right?

If you check recent reviews in TikTok’s PlayStore page you’ll notice that all these 1-star reviews are complaining about YouTube’s decision of taking down Minati’s video. Instead of going against YouTube to complain about the decision, they are putting all the guilty on TikTok’s shoulders. The fans are also blaming YouTube. According to them, the platform didn’t defend Carry Minati since he was defending YouTube during the struggle. The support for Minati is also trending on Twitter and Instagram with #justiceforcarry hashtag. The support is also growing in Facebook & YouTube where posts and videos are recommending users to delete the Chinese social media app or to at least give it a 1-star review.