Last week, Sensor Tower released a report which details TikTok’s (a short video making app) download performance. According to the company, the Chinese app is the world’s most downloaded application (non-game) in May 2020. For May 2019, this app has about 111.9 million downloads. This is over twice the number of installs it got in May 2019.

Today, Sensor Tower again released the financial assessment of TikTok. According to the company, TikTok attracted more than $95.7 million in the global App Store and Google Play. This value is more than 10 times that of May last year. Among them, about 89% of the revenue comes from the Chinese market. Interestingly, the US market ranks second, contributing 6.2% of the revenue. In the third position is the Turkish market, accounting for 1.2%. See the chart below for the complete list of the top 10 global mobile app revenues. 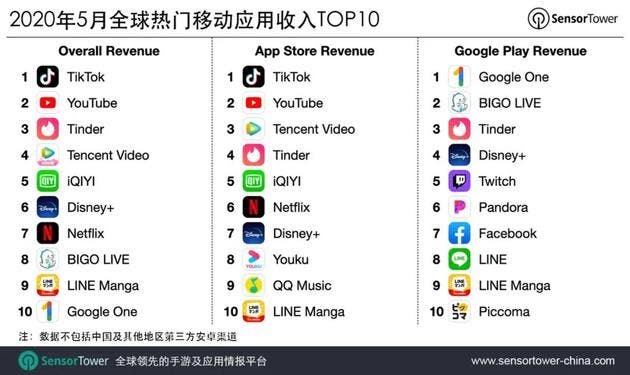 Well, TikTok attracted more funds than heavyweights like YouTube in the second position with a revenue of $78.4 million. For YouTube, this figure is a 77.3% increase over the same period of last year. American users contributed 55.7% of YouTube’s revenue, followed by Japanese users, accounting for 11.8%.

According to statistics, the country with the most installed TikTok apps in May is India. Of the 111.9 million downloads, India accounts for over 20% of the total downloads. Despite several warnings from top U.S. officials, the United States still accounts for 9.3% of the total TikTok downloads. From the perspective of mobile phone systems, TikTok ranks first in Android downloads in May. However, for the iOS system, it ranks second, behind online meeting software, Zoom.

In May this year, many TikTok users began to change their profile pictures to black power symbols. This is in protest of the platform’s unfair attitude of censoring black creators. There are reports that TikTok users will unfollow other users who do not support this movement. However, black creators require non-black allies to follow at least one new black creator.

TikTok’s response reads “We are very grateful to be accountable. We know that it takes effort to reach a place of trust, but we are committed to doing our part because we will continue to cultivate a way to accommodate everyone”.

In December last year, the app admitted that it suppressed videos of disabled, gay, and fat creators. Other videos that got this unfair treatment include users with autism, down syndrome, birthmarks, or “slight strabismus”. For TikTok, these creators are vulnerable to “cyberbullying” but that is not a good reason.

TikTok’s parent company is a Chinese company, ByteDance, and TikTok’s Chinese version is “Douyin”. On the Apple store, TikTok is the “World’s Most Downloaded App” in the first, third, and fourth quarters of 2019. This app has been at the hub of multiple controversies and there are many organizations, especially in the U.S., that does not use this app.