Xiaomi has confirmed that the Xiaomi Mi Band 5 will be officially announced on June 11. Today, the company revealed some features of the upcoming smartband. It turns out this product will sport a larger dynamic large screen (20% increase), magnetic charging, NFC UnionPay flash payment, etc. Of course, the most important thing is the upgrade of the new sensor.

Not surprisingly, the new sensor of the Xiaomi Mi Band 5 is still built by Huami Technology.

Huami brings its own sensors

Huami Technology, which cooperates with Xiaomi to produce Xiaomi bracelets, will hold an AI innovation conference on June 15. Huang Wang, the founder and CEO of Huami Technology, said that companies with extremely real software should produce their own hardware. Also, those who are serious about big data should make sensors themselves.

He said that Huami Technology, as a cloud-based health service provider, attached great importance to the conversion of user health data into software algorithms in the early days of entrepreneurship. After years of continuous accumulation, some breakthroughs and achievements have also been made in software algorithms. And the importance of sensors is self-evident. 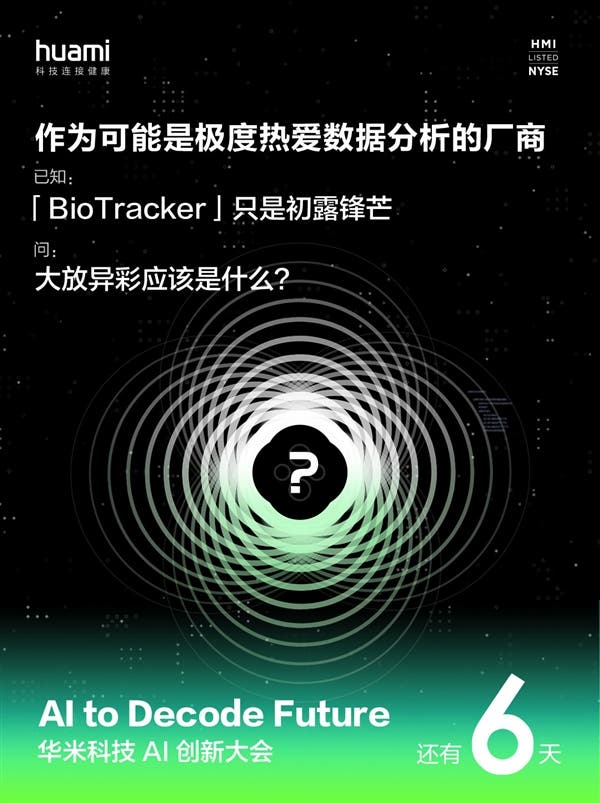 As an important part of wearable devices, sensors need to collect health data for algorithms. For this reason, most wearable device manufacturers go to the supply chain to find suitable sensors for them.

Therefore, in 2015, Huami’s first self-developed PPG bio-tracking optical sensor, BioTracker, was first mounted on the Xiaomi bracelet. It can collect heart rate data very accurately, which is also a function that can be completed by relatively good wearable devices.

‘But among the tide of the technology industry, how can we wait for industry development to promote industry progress?’

Huang Wang said that at present, 70% of people in China do not sleep well. ‘Do we want to help users improve their sleep problems? Do we want to monitor the sensitive body temperature during the epidemic for the users, even more, important than blood oxygen in heart rate?’

At the same time, the company released four posters to showcase the new features of the Xiaomi Mi Band 5.