Realme seems to be working on a new iteration of the C series of smartphones. The Realme C11, as it was spotted on the NBTC database, looks like it is several generations ahead of the Realme C3, at least from its moniker. And it’s the first time we’ve encountered the model.

As spotted by Mysmartprice, the device has cleared various certifications in the Asian market. This includes Thailand’s NBTC, Eurasian EEC, Malaysia’s SIRIM and Indonesia’s TKDN. The model number of the device is listed as RMX2185. 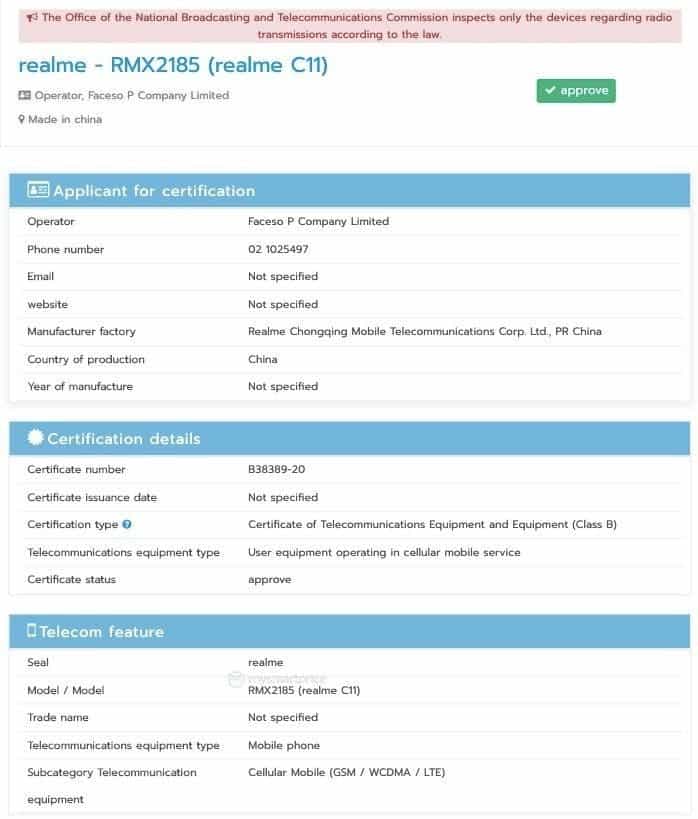 The certifications also shows support for LTE connectivity which obviously is a no brainer. Apart from this, anything juicy isn’t known about the device. However, it’s the model name that, unusually, attracted our attention the most.

A look back at the Realme’s C series

Realme’s C series of smartphones have always been bang for the buck when it comes to Asian markets. If we recall, Realme launched the Realme C3 in Indonesia back in February with a fingerprint sensor.  This got rebranded as the Narzo 10A in India.

However, both the smartphones had the Mediatek’s Helio G70 SoC and similar in specifications but the Indian version of Realme C3 skipped the fingerprint sensor.  Hence, Going by the predecessors, we can expect a bigger display and upgraded internals in the new Realme C11.

Apart from this, the device could sport a base variant of 3 GB RAM and higher while running on the latest Realme UI based on Android 10. It is yet to receive a certification from India’s BIS which could also mean the device might debut elsewhere before dropping the covers in the country.

When is it coming?

That being said, these are just speculations from our side, and we will have to wait for an official word from the company. Considering the host of certifications that the device has got so far, it looks like the device might be heading to the retail stores sooner than expected.

Previous The U.S. piles up more pressure on the UK on Huawei 5G ban

Next Redmi phone with MIUI 12 & 10W charger gets FCC certification

Realme C3 is getting Android 11 update in India