With the increase in mobile gaming, Gaming smartphones have become a genre of its own. Currently, Nubia RedMagic, ASUS ROG, and Xiaomi Black Shark are some of the most popular mobile gaming smartphone series. ASUS ROG 2 was released last year and it got a lot of success. Now its time for ASUS to refresh its ROG Phone to the third-gen. The ASUS ROG Phone 2 came in 2019 with flagship-level specifications. The ROG Phone 2 featured Snapdragon 855+, a higher 120Hz display, and don’t forget the breathtaking gaming design. Hence, we are excited about the successor of ROG Phone 2, and how will it survive in the high competition market.

First of all, the ASUS ROG Phone 3 will feature a 6.59-inch display and a 5800mAh battery. Moreover, there will be 5G connectivity with SA/NSA support. Other than that, the device will feature two SIM card slots while the phone measures 171 x 78 x 9.85mm. Lastly, the phone will come with the Android operating system which is obvious.

Apart from the new TENAA listing, we also have some other features the device will carry. Thanks to GeekBench listing, we know that the upcoming phone will be powered by Snapdragon 865 SoC paired with 12GB RAM. The Wi-Fi Alliance listing shows that the upcoming phone has a dual-band Wi-Fi ax. And finally, according to the 3C Certifications, we know that the device comes with 30W fast charging support. 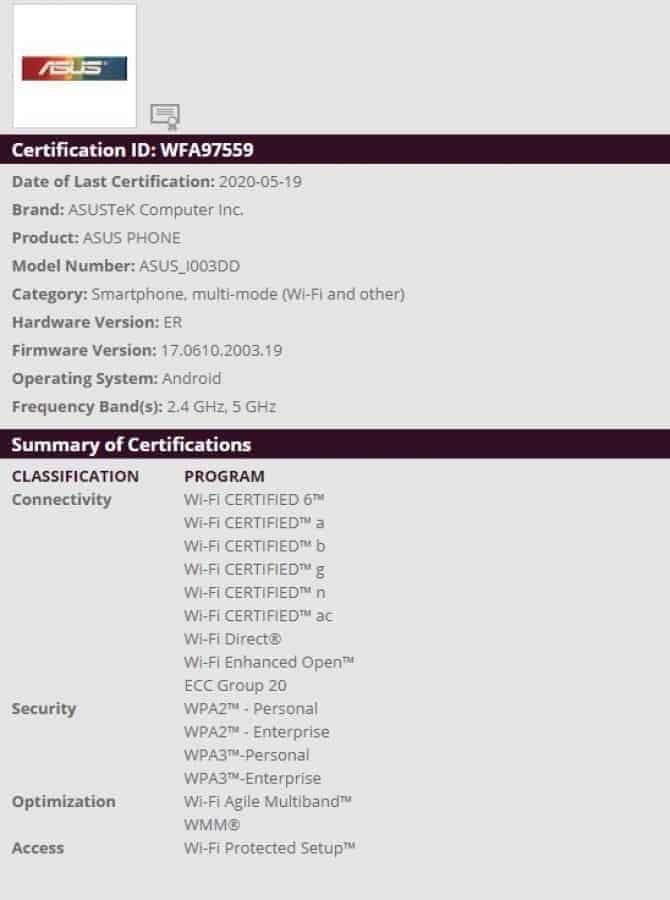 According to the specifications above, the ASUS ROG Phone 3 doesn’t offer anything extraordinary. Of course, there are a ton of un-revealed features the gaming phone will have including new design, refresh rate, gaming features, etc. But still, the competition is now at peak since another competitor has jumped up. It is no other than Lenovo Legion smartphone. The upcoming Legion smartphone is expected to feature some high-end specs. 90W Charging and 144Hz refresh rate are to name a few. So, in a nutshell, ASUS’s next phone is going to face a lot of competition.