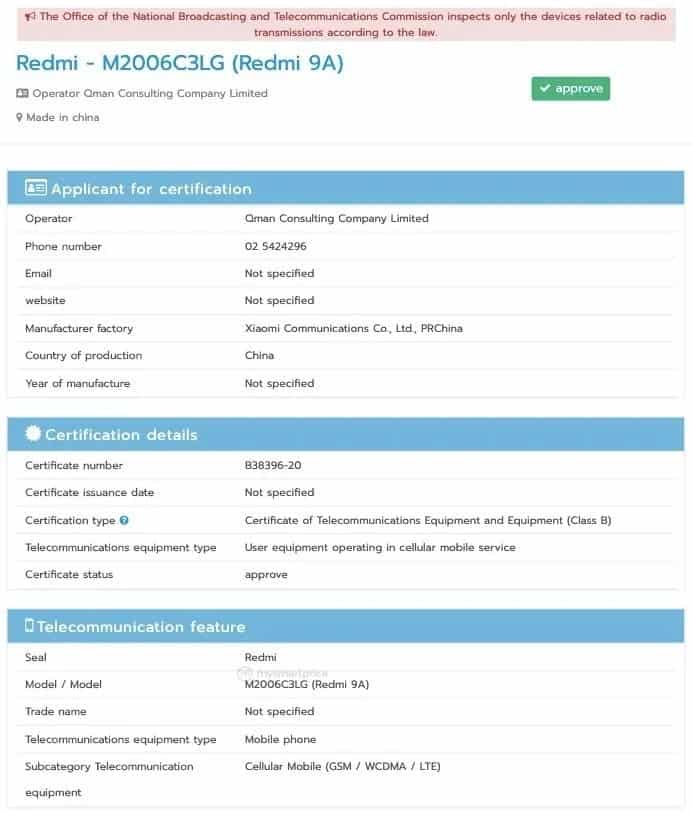 The relevant certification information shows that Redmi 9A comes with MIUI 12 operating system. This smartphone also supports dual SIM cards but only supports 2.4GHz Wi-Fi networks. In addition, Redmi 9A has a built-in 4900mAh battery as well as a  10W charger. It supports 4G LTE network and has a size of 164.85×77.07mm.

Earlier this week, Chinese manufacturing giant, Xiaomi, officially released the Redmi 9 in Spain. At the time of its release, this smartphone arrived with 3GB/4GB of RAM and 64GB of internal storage. While the 3GB+32GB version sells for 149 euros ($168), the 4GB+64GB version goes for 179 euros ($201). However, a smartphone with the same model number M2004J19G recently appeared on TENAA. This listing suggests that this smartphone will be arriving in China soon.

The Redmi 9 comes with a 6.53-inch full-HD+ (1,080×2,340 pixels) waterdrop display. This smartphone uses a MediaTek Helio G80 octa-core SoC clocking 2GHz as well as a Mali-G52 GPU. It comes with up to 4GB of RAM while the internal storage reaches 64GB. There is also an option for a microSD card. Furthermore, this device comes with Android 10 out-of-the-box.

In the camera department, the Redmi 9 uses a quad camera setup. It has a 13MP main camera as well as an 8MP ultra-wide camera, a 5MP macro shooter, and a 2MP depth sensor. The rear camera features include Kaleidoscope, ultra-wide-angle mode, macro mode, portrait mode, and supports 1080p at 30fps. On the front, this device comes with an 8MP shooter, The front camera supports palm shutter, portrait mode, HDR, screen flash, self-timer, and more.

The Redmi 9 boasts of a huge 5,020mAh battery which supports 18W Quick Charge 3.0. Inside the box is a 10W charger. This means that the charger in the box can only deliver 10W. If you want its maximum charging capacity, you will have to separately buy an 18W charger. For connectivity, this smartphone is compatible with 4G VoLTE, Wi-Fi 802.11 a/b/g/n/ac, Bluetooth v5, Wi-Fi Direct, FM Radio, NFC, GPS, AGPS, 3.5mm audio jack, USB Type-C port, and infrared sensor. It also supports vibration motor, distance sensor, ambient light sensor, accelerometer, and electronic compass.