OnePlus has revealed the OnePlus 8 and 8 Pro in April, however, these devices aren’t the only smartphones coming from the company this year. Of course, we’re not talking about the 8T series which is also expected. We’re talking about a new mid-range smartphone. A few weeks ago, the company’s CEO Pete Lau revealed that the company is gearing up to increase its offer of smartphones in different price segments. In other words, OnePlus wants to rescue the essence of value for money handsets with a new upper mid-range smartphone. The coming device will be called the OnePlus Nord. 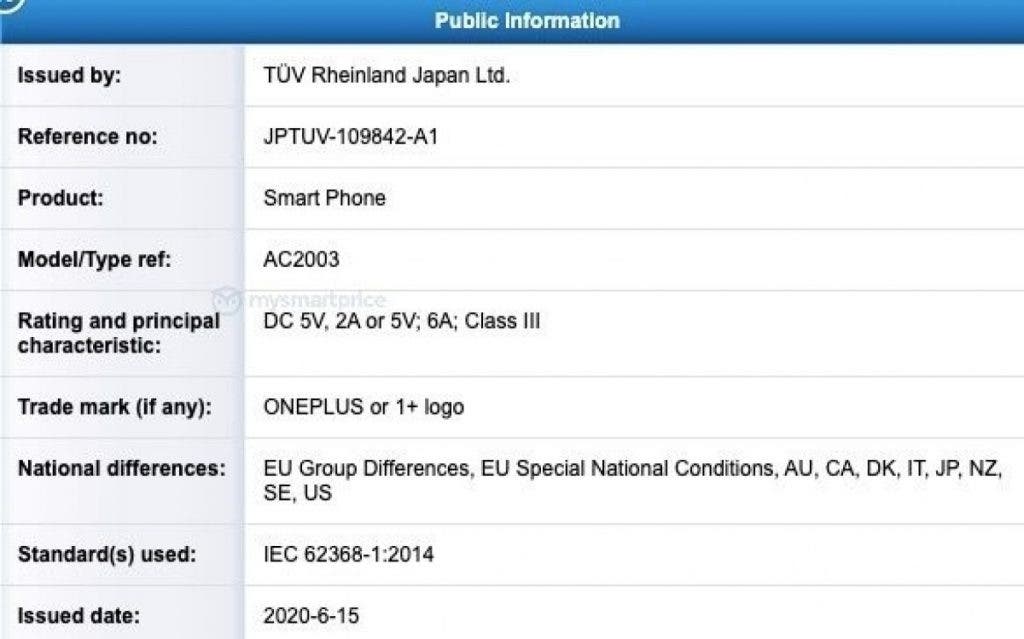 We’ve been hearing rumors about a mid-range OnePlus since the beginning of the year. Previously, it was being called OnePlus 8 Lite, then the alleged name changed to OnePlus Z. Now, it seems that OnePlus Nord will be the real name of the upcoming handset. Today, the device was certified by TUV Rheiland. It revealed a 30W fast-charging support. Moreover, the device boasts AC2003 model number, and apparently it will be available in a broad range of countries across the globe. Furthermore, the device also has gone through India’s Bureau of Indian Standards (BIS) certification process. In the India regulatory agency, the device boasts the AC2001 product name.

According to rumors, the OnePlus Nord 5G will boast a 6.55-inch Super AMOLED display with FHD+ resolution and a 90Hz refresh rate. Moreover, there is a in-display fingerprint for biometric authentication. Moving around the back, we expect a Quad-Camera setup with a 64MP Main shooter leading the show. Previous renders of the handset suggested a triple-camera array, but apparently, OnePlus is upgrading this bit. The camera array also has an ultrawide, depth, and macro cameras.

Under the hood, the smartphone will pack the Snapdragon 765G chipset with up to 12GB of RAM and 128GB of Internal Storage. It draws power from a 4,300mAh battery with the 30W fast-charging. On the software front, we can expect Android 10 with OxygenOS running on top. As per rumors, the device will arrive in the INR 25,000 (~$330) price range.

The OnePlus Nord launch is expected for the next month. However, it’s still unclear when exactly the device will be unveiled. OnePlus is yet to confirm the smartphone as well as its launch date. We’ll surely be keeping an eye for more clues regarding OnePlus first mid-range phone in years. If the company keeps excellent support with a more affordable handset, then, it’ll probably be a hit.