Well, OnePlus Buds have now made its way to its first certification in Finland revealing some key information along the way. 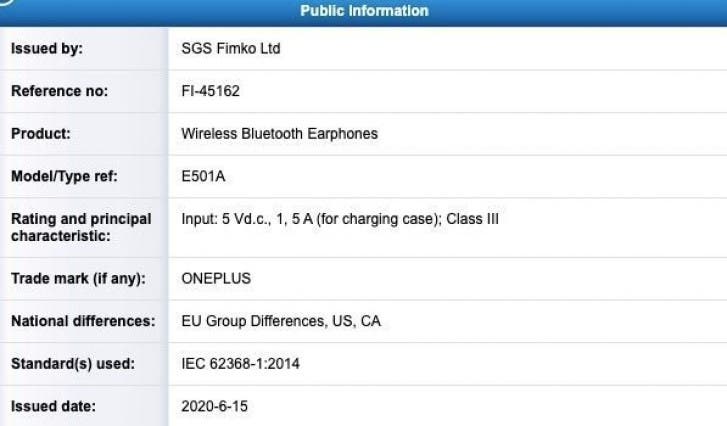 The yet-to-be-announced OnePlus Buds has now surfaced on the SGS Fimko certification. Since the product has now appeared on certification, it is safe to assume that the brand is indeed working on its first-ever TWS buds. The listing mentions the model number E501A along with ‘Wireless Bluetooth Earphones’. Although the listing doesn’t clearly mention OnePlus Buds, we’re assuming the model number to be of the product. It makes sense considering we only know about the upcoming TWS as of now.

With that said, the listing doesn’t talk about anything else about the upcoming OnePlus Buds. Since it has now appeared on the first certification, we’re looking at more information to come forward in the near future.

The recent certification of OnePlus Buds out of the blue suggests that we might see the product going official alongside the much-awaited OnePlus Nord. To recall, OnePlus will launch its Nord smartphone on July 21. As of now, the company only has an OnePlus Bullet lineup of earbuds that uses a neckband form factor.

With all the smartphone makers jumping into the TWS earbuds market, OnePlus might be planning to do the same. It would be interesting to see how well their TWS will perform in the market.