This morning, Redmi announced that the domestic sales of the Redmi K30 series have exceeded 3 million units. And while many may be surprised of this statement, we know the Redmi line models have been always showing great performance in the market. In this sense, the K30, as the best handset of the brand, has bene expected to have such a performance. 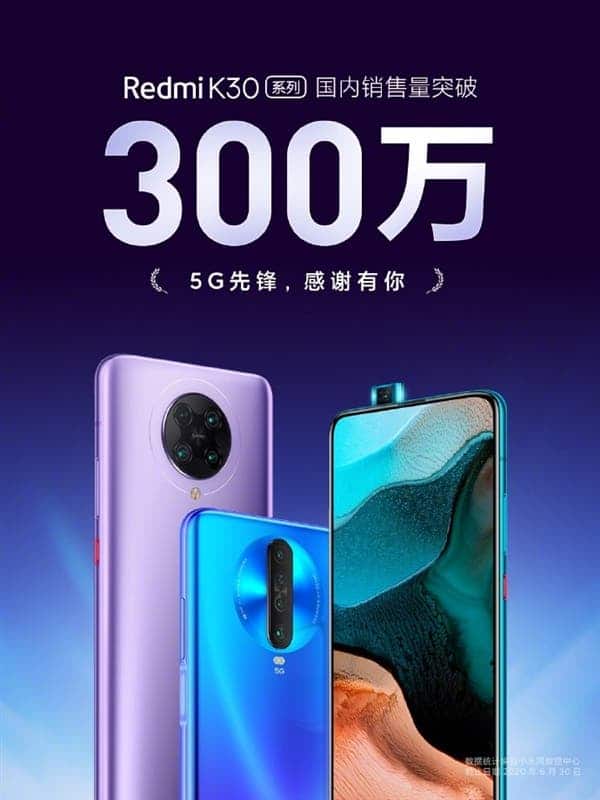 The company said that the Redmi K30 series, as the Redmi flagship model, adhering to high-quality production technology, created price-sensitive products for users. So more people can enjoy the beauty of science and technology.

According to the data, the K30 series is the first dual-mode 5G smartphone in the Xiaomi series. The phone supports SA and NSA dual-mode 5G.

But this data is not surprising, when looking at its key features. The Redmi K30 uses a 6.67-inch dual-hole full screen. It has a refresh rate of 120Hz. Also, we are dealing with the world’s first Qualcomm Snapdragon 765G Smartphone. In the front, there are two camera sensors of 20MP and 2MP resolution and of course, it supports AI shooting. On the opposite side, we have a 64MP main camera (Sony IMX686 world premiere), an 8MP super wide-angle lens, a 5Mp super macro lens, and a 2MP depth of field sensor. The battery capacity is 4500mAh, and it support 30W fast flash charge.

In addition, Redmi launched the enhanced variant of the K30, namely the Redmi K30 Pro. It came in the first half of this year. Moreover, it has two special variants of standard version and the zoom version. The zoom version has a rear 64MP main lens + 13MP super wide-angle lens + 30x zoom lens + 2MP depth of field lens. The camera supports dual OIS (optical image stabilization). Generally, only the main lens and telephoto lens support OIS.

The Redmi K30 Pro sports a 6.67-inch pop-up full screen with a resolution of 2400×1080. Under the hood, it carries a more powerful Qualcomm Snapdragon 865 flagship platform. The front camera has a 20MP resolution, and the battery capacity is 4700mAh. It also supports 33W flash charging.

Redmi expressed its gratitude to each Mi user for more than two hundred days of support and trust. Also, the company promised to bring more outstanding phones in the nearest future. We are waiting for the Redmi K40 (or whatever it is called) to come with the latest technology and a low price tag.