Recently, Honor launched its first notebook powered by an AMD chip. And it was welcomed quite well. Moreover, before that, Redmi released its own model and it was sold out swiftly. This simply means, for an average customer, the processor brand is not primary. But on the other hand, the AMD chips are way cheaper than their rivals from Intel. This also means we should wait for more AMD notebooks to come our way from top brands. Well, when saying ‘top brands’, we mean the smartphone makers that have switched to laptops. Not that long ago, a Weibo blogger exposed the Huawei MateBook D Ryzen version.

He also revealed some information concerning the upcoming Huawei MateBook D Ryzen version. Particularly, the blogger said the laptop will sport a DDR4-2666 memory. As for now, this notebook was leaked in a benchmark site. Thus, we can learn about its other key features as well. As for the memory, we see it will use a DDR4-3200 RAM. 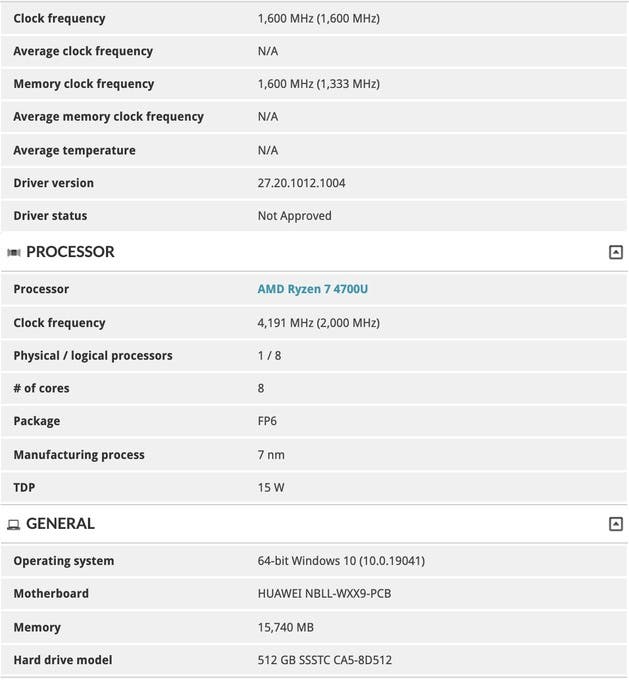 Apart from this, in the photo above we can find that this notebook comes with an octa-core 8-thread R7 4700U processor. Thus, this is the same chip that appeared on the MagicBook 14/15. But the memory is DDR4-3200, and the SSD comes from the Lite-On brand. It has a continuous reading speed of up to 3300MB /s and a continuous write speed of up to 2100MB/s.

Well, we have been guessing that the Huawei MateBook D Ryzen version will differ from the Honor MagicBook Ryzen version a little. But the key features will remain the same. Thus, recalling the selling points of the Honor notebook, we can assume what highlights the Huawei model will bring.

The Honor MagicBook Ryzen Edition comes with the AMD Ryzen 7 4800H processor. It is based on a 7nm process technology. Also, it uses an 8-core 16-thread design. The main frequency is up to 2.9GHz, a maximum acceleration frequency can reach 4.2GHz.

The Honor MagicBook Ryzen Edition also features a shark fin dual-fan 2.0 version. It uses a game-level fan motor that can reach up to 5800rpm. It is also matched with a dual heat pipe design to achieve game-level efficient heat dissipation. The CineBench R15 multi-core running 30 consecutive rounds scored a final score of 1611 points.

Next Realme will attend IFA Berlin for the first time