In April this year, OPPO released a mid-ranger, namely the A72. But it is a 4G phone, which is not in trend. We mean many manufacturers have announced they won’t release 4G phones anymore. The 5G era has come. So there should be more products supporting this new technology. But what can OPPO do in this situation? It just added a new chip inside and a new 5G smartphone is ready. Today, a new OPPO phone has appeared on GeekBench. And there is every reason to think we are dealing with the 5G-enabled variant of the OPPO A72. 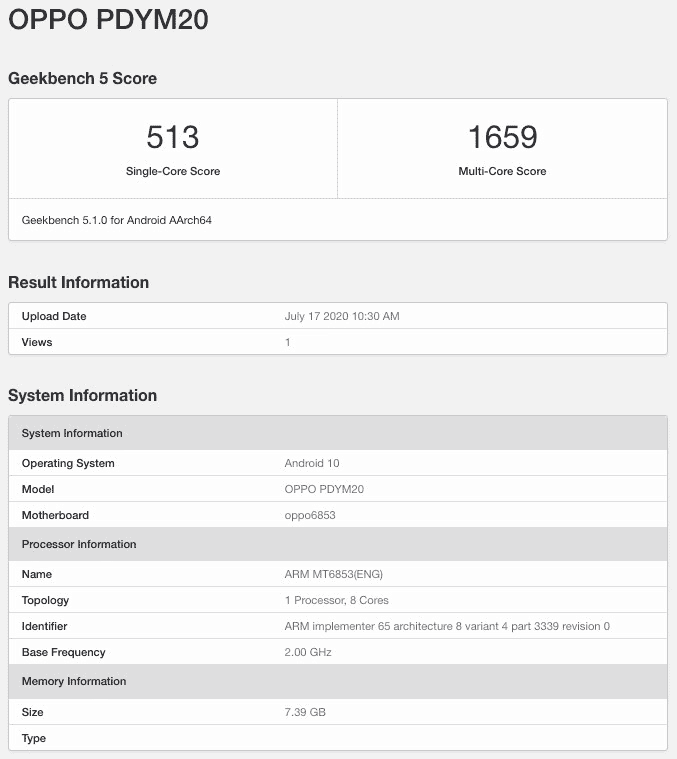 As the GeekBench screenshot shows, the alleged OPPO A72 5G smartphone will run Android 10. Apart from this, there is an 8GB of RAM and what’s more important, the phone is packed with the Dimensity 720 chip.

To understand whether these features are changed or remain the same, let’s recall the selling points of the original OPPO A72. The latter is packed with the Snapdragon 665 chipset. It has a 4GB of RAM along with a 128GB of storage. On the front, it carries a 6.5-inch display with an FHD+ resolution. It uses a hole-punch screen design, which hosts a 16MP selfie shooter.

On the opposite side, we can find a quad-camera, which consists of a main 48MP CMOS, an 8MP ultra-wide lens, a 2MP macro sensor, and a 2MP depth sensor. Apart from the cameras, the rear is quite clean since the fingerprint scanner is placed at the side. The handset sports a 3.5mm headphone jack at the bottom along with a USB-C port.

Under the hood, we can also find a 5000mAh battery, which supports 18W fast charging. Though OPPO has introduced its 125W flash charging solution and we know it has had the fastest charging phones on the market before this, such technologies are still available on flagship models only.

This handset runs on ColorOS 7.1 based on Android 10.

So as we can see, the memory volume has been doubled, and the company has replaced the chip to make it support the 5G network. In this sense, Dimensity 720 is one of the cheapest options on the market. In fact, this chip has been developed to compete with the Snapdragon 690. But who says the manufacturers can’t use it for other purposes. This chip has not been officially announced yet, but its images have been spotted on MediaTek’s official website under the title ‘With MediaTek Dimensity, Expect Incredible’.

Next How to transfer contacts from Android to iPhone with ease