Today, Ni Fei, President of Nubia Technology Co., Ltd., continued to warm up the upcoming Red Magic 5S on Weibo. As you know, previously, it was reported that this handset will come with a ‘silver’ heat dissipation material. And today, from the promo poster, we learned that it will come gaming ecological peripheral equipment – ice wind cooling magic box. 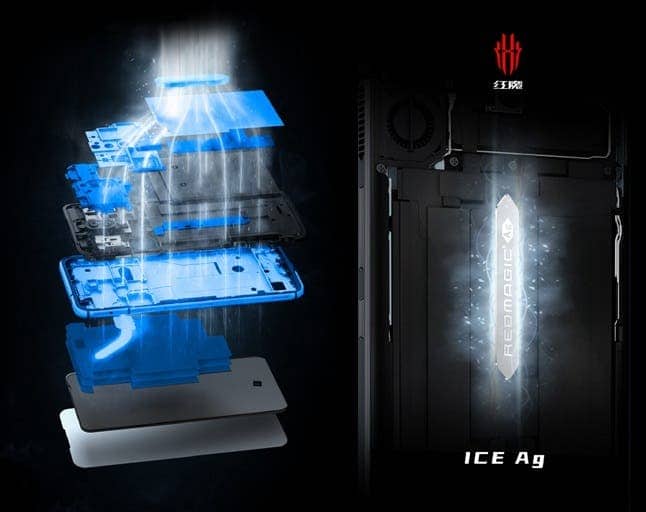 As the company says, the Red Magic 5S’s metal silver process (ICE Ag) is combined with a series of heat-conducting components stacked on the inside of the fuselage. This will turn into a fan with a transparent air duct from north to south. There is also another efficient heat transfer inside the fuselage. The ice wind heat dissipation magic box covers and connects ICE Ag, through semiconductor refrigeration, providing rapid heat dissipation and cooling.

Ni Fei also said that the Red Magic 5S uses silver (ICE Ag). This metal process has the highest thermal conductivity in the world. Also, it is combined with a 4843mm² super large heat dissipation copper foil to efficiently conduct heat to the outside. It has a built-in high efficiency of 15,000 rpm. So we can say this gaming phone will come with a series of heat dissipation combinations such as centrifugal fans, air ducts with north-south permeable design, high-performance thermal conductive gels, and large liquid cooling tubes.

Well, this is vital for a gaming phone at this level. But it’s also very important to sport powerful hardware. In this sense, the Red Magic 5S has no reason to worry about a thing. Moreover, it can boast of the processor under the hood. If you are not aware yet, this smartphone will come with the Snapdragon 865 Plus SoC. Moreover, the ASUS ROG Phone 3 and the Lenovo Legion will sport the same chip and fight in the same niche. So there is every reason to expect for a Black Shark smartphone with an identical chip inside. But the Red Magic model will come as soon as this month. And if we have heard the two other models are on the way as well, there is still no information from Black Shark.

Anyway, the new-gen Nubia gaming phone is on the way. It is promoted with a slogan of ‘Red Magic 5S, Beyond Plus’. This is a clear hint at the Snapdragon 865 Plus full-blooded chip.