Realme teased a wireless charger back when it launched the Realme Buds Air TWS in India. But, the charger wasn’t available for several months. However, as teased by the India CEO Madhav Sheth a while back, the charger is now available on its website for a price of ₹899. Alongside this, the India head also teased the arrival of 50 and 65W mini adapters in India.

The Realme Wireless Charger is the company’s first venture into the induction-coil based charging technology. The charger is available on Realme’s website in a single grey colour option and comes with universally compliant Qi Wireless Charging Standard.

Looking at the charger, there is a silkscreen printing with matte soft paint on the charging surface. On the side, there is a Type-C port which is welcoming, to say the least. Beneath the charger, it looks like there is a thick rubber surrounded by circle stripes probably for better grip.

Interestingly, the details underneath the charger show a ‘Made in China’ and has a model number RMA203. The maximum output is rated as 10W, but the description says it can provide a max output of 7.5W for iPhones when supplied with input with QC 2.0(10W) or a 3.0(18W) charger. 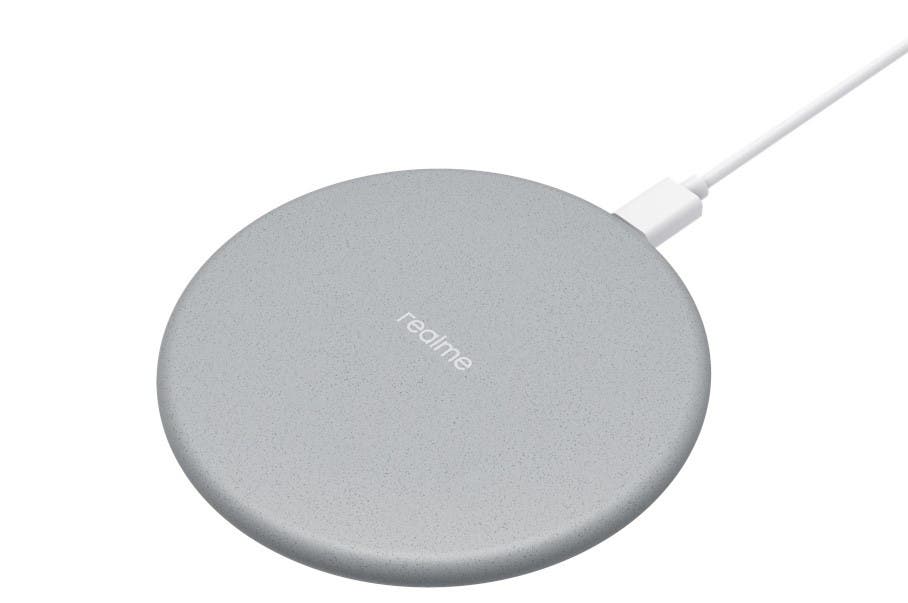 Measuring in just 9mm thickness, the charger has features like foreign object detection, the transmission distance of about 5mm and lesser. Realme says apart from the Realme Buds Air, it supports other devices like smartphones, wearables that support the Qi standard.

Priced at ₹899, the Realme Wireless charger is currently available only on realme.com but we can expect it to be available elsewhere pretty soon.

Alongside this, CEO Madhav Sheth also revealed that the company would be bringing the 50 and 65W Ultra-thin SuperDart Charger models to India soon.

If we recall, the adapters made a debut along with the 125W Charging solution at the Chinese event of Realme. If we recall, these look very similar to the mini-SuperVOOC chargers that Oppo unveiled at its own event.

We will soon introduce the 65W and 50W #realme Ultra-thin #SuperDart Chargers. More easy to carry and use. #TechTrendsetter pic.twitter.com/e6eL4OvFjx

If Realme adopts a similar tech inside, the 50W charger will have a Gallium Nitride for conducting higher voltages and currents in small size. Supporting 27W PD and 50W PPS protocols, the chargers are aimed to be ultra-portable and help juice up the devices quickly during travel.

Let’s wait for the official word from Realme to know more.