According to the insider “Digital Chat Station”, in the certification documents of TUV Rheinland, the battery of a certain new Xiaomi smartphone has appeared (in the document itself, belonging to the MI brand is indicated). Its capacity is 2*2250 mAh. According to the Chinese source, such a battery will be used in dual battery cell technology in the upcoming flagship – Mi 10 Pro Plus. It will be equivalent to 4500mAh.

The need to split the batteries in two is due to the use of ultra-fast charging – according to various sources, Xiaomi Mi 10 Pro Plus will support charging with a speed of 120 watts. Also, the model should arrive with an AMOLED display with a frame rate of 120 Hz, a 48-megapixel camera and Snapdragon 865 SoC (according to other sources – MediaTek Dimensity 1000+). The Mi 10 Pro Plus is expected to premiere on August 11th. 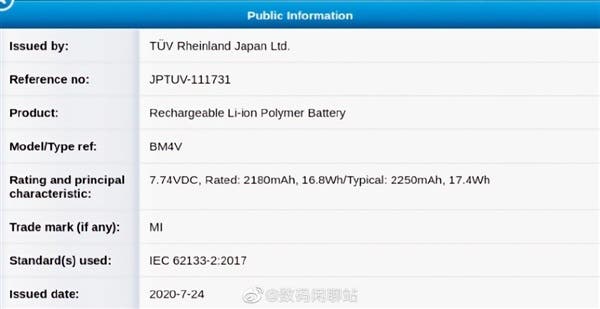 Xiaomi company was founded 10 years ago. The official date of birth of the brand is April 6. This year, the coronavirus pandemic prevented the company from hosting the anniversary celebrations in April. Nevertheless, Xiaomi decided to celebrate this event. It will hold a press event dedicated to the 10th anniversary of the company. In which we expect the Xiaomi Mi10 Pro Plus smartphone to be official.

Xiaomi CEO Lei Jun announced today that he will deliver his first public speech on August 11. Naturally, in his report, he will talk about what the company has already achieved. In addition to the goals that it has set for itself for the next decade of activity. But, perhaps, the main event will not be the report under the motto “higher, faster, stronger”. But the unveiling of new products. In particular, Lei Jun stated that “the team has prepared several masterpieces for the 10th anniversary for everyone who wants to see the company’s achievements”. It clearly hints at the announcement of new products. And the premiere of Xiaomi Mi10 Pro Plus will fit perfectly into the scale and significance of the event. At least, insiders are confident that the premiere of the upgraded version of the flagship will take place on August 11.