Xiaomi has pretty much inflated the Redmi K30 series, which already has six models. But this is not the limit. Tomorrow they will be joined by the seventh device – Redmi K30 Extreme Commemorative Edition, which is also known as Redmi K30 Ultra. The release of the device will coincide with the 10th anniversary of Xiaomi.

Redmi K30 will use a 120Hz high refresh rate display

Among the distinctive features of the device is called an AMOLED display with a refresh rate of 120 Hz. Recall that the company has saved money and the Redmi K30 Pro offers a screen also made using OLED technology, but the frame rate is limited to 60 Hz. It seems that the head of Redmi Liu Weibing considers this particular feature of the “firmware” to be a drawback, who said that Redmi K30 Extreme Edition will correct the drawback of Redmi K30 Pro. 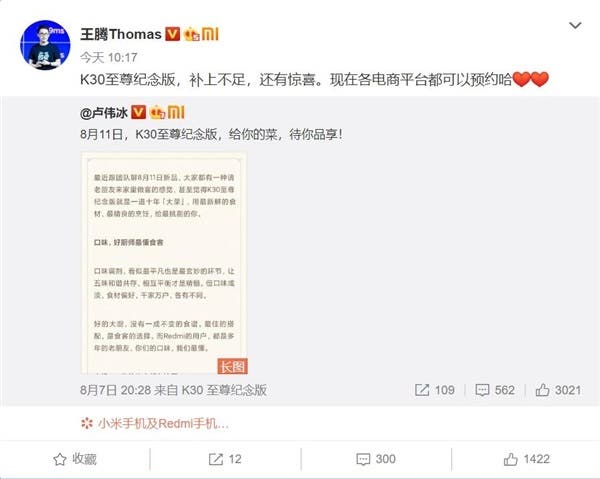 But, perhaps, the most interesting feature of the new item will be not so much the display as the Dimensity 1000+ SoC. It will be interesting to see how it handles throttling during peak loads, and also to determine how power hungry it is. In terms of performance, this is one of the best solutions in the mid-price segment, which outperforms Snapdragon 765G, Kirin 820 and Kirin 985.

We know that Redmi K30 Extreme Edition or Redmi K30 Ultra will offer a 4500 mAh battery with fast charging, a 20-megapixel pop-up front camera, up to 12 GB of RAM and a four-module main camera with a 64-megapixel main module.

Recall that earlier in March, Xiaomi has officially announced the Redmi K30 Pro and K30 Pro Zoom Edition, and here is a reminder of their specifications: