Since the last week, Gionee has been teasing Indian customers with the arrival of a new smartphone packing a modern design and a massive battery. It’s interesting to point out that Gionee was one of the most notable Chinese companies betting in India a few years ago. However, the company failed to keep up with the competition and almost gone bankrupt. In 2020, however, the Chinese firm is back with a lot of new mid-range devices, but it clearly focuses on the budget and low-end segment. The Gionee Max impress with a 5,000mAh battery, but the other specs are far from being impressive.

Under the hood, the handset packs a Spreadtrum’s SC9863A SoC at the helm featuring 2GB of RAM. This chipset is an Octa-core ARM Cortex™-A55  in a two cluster-mode with 1.6GHz+1.2GHz, respectively. The phone runs Android 10 straight out of the box which certainly comes as a surprise from Gionee. A few weeks ago one of its devices was listed with Android Nougat, even in 2020. Worth noting that the Gionee Max runs full-fledged Android since it comes a few months ahead of Google’s deadline for Android phones with 2GB of RAM. By the end of the year, all devices with 2GB of RAM will need to come with the Android Go edition.

The phone comes with 32GB of onboard storage which is very good for a budget phone. It also comes with a dedicated microSD card allowing you to further expand this amount up to 256GB. 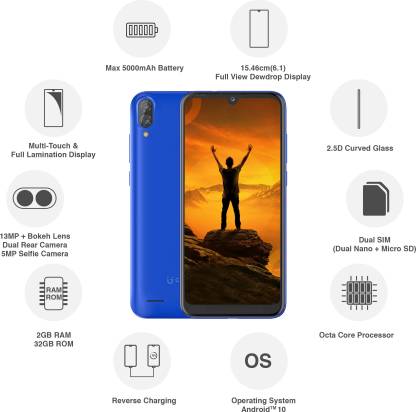 The Gionee Max packs a 6.1-inch LCD Display with HD+ resolution and 20:9 aspect ration. Worth noting that there is a waterdrop notch at the top serving as a house for the 5MP selfie snapper. Despite the notch, the phone still has fairly thick bezels. Moving around to the back, we have a plastic housing and a dual-camera setup. It comprises a 13MP primary camera joined by a Bokeh camera of unspecified resolution.

A massive battery, but…

The Gionee Max does not include a fingerprint scanner, which isn’t a surprise in this price point. The software still provides Face Unlock feature, but that’s not enough for allowing you to quickly enter some apps without inserting your password. The phone draws power from a massive 5,000mAh battery with reverse charging support, meaning that you can still use this phone as a power bank. The only downside is that, yes, this phone has a micro USB port. So you’ll be limited with the slow capabilities of this charging port. 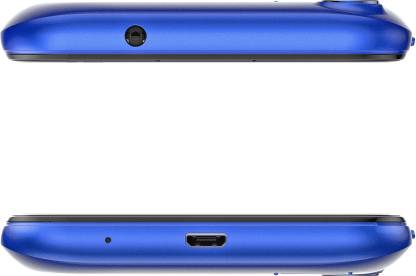 The Gionee Max will go on sale in India from August 31 through Flipkart. The device will be available in three colors – Black, Red, and Royal Blue. It retails at INR 5,999 ~ or $80 which makes it a very cost-effective device.