Realme has celebrated two years in May as one of the most interesting smartphone makers in this competitive market. Now, the company wants to keep its success story with the release of two new smartphone packing cutting-edge specs. In the coming weeks, the company will reveal the new Realme X7 series with high-refresh-rate displays and powerful chipsets. Today, a Realme RMX2121, a phone that is allegedly the upcoming Realme X7 Pro surfaced on Geekbench testing. According to the listing, it sports a MediaTek Dimensity 1000+ chipset. 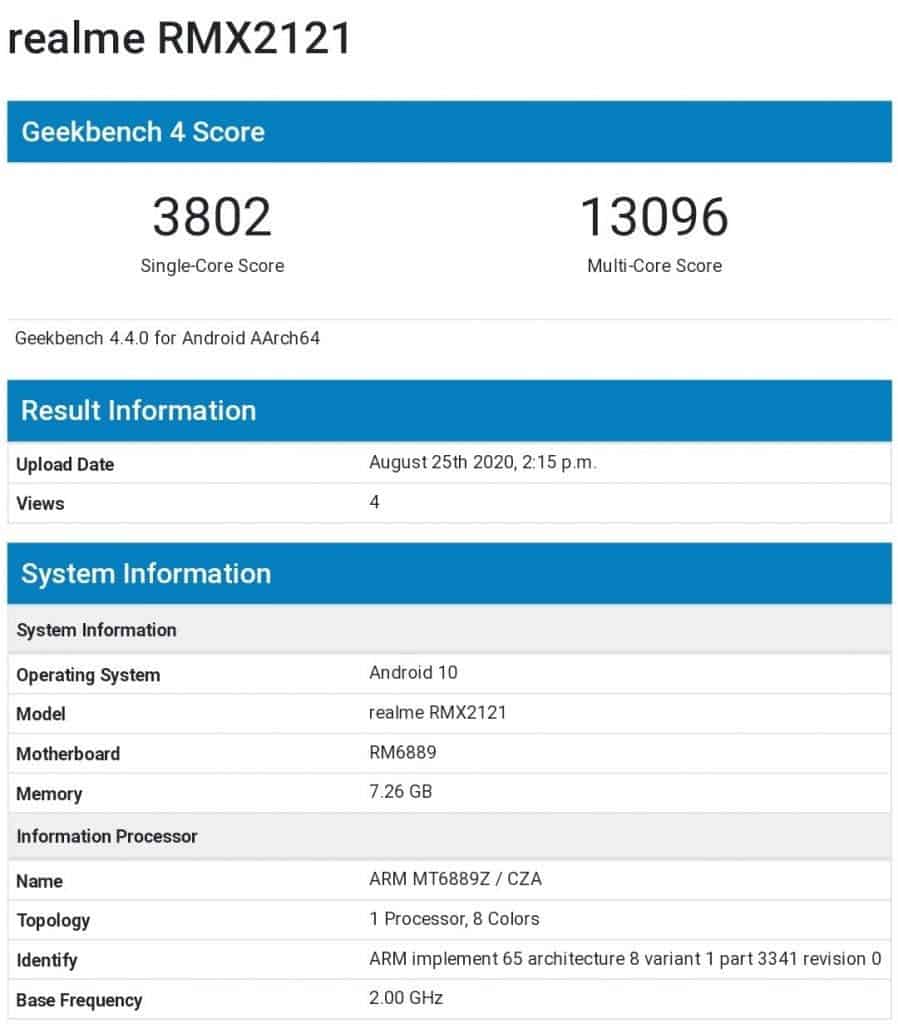 The Dimensity 1000+ chipset that also goes by MT6889Z gives impressive results on the GeekBench 4.0 platform. It reached 3,802 points on the single-core and 13,096 points on the multi-core department. However, you must be aware that these results will be inferior on a GeekBench 5.0 test. The model that passed through GeekBench has 8GB of RAM and Android 10 in tow. The Dimensity really brings a flagship-like experience, but phones with it aren’t expensive as those using Snapdragon 865 chipsets.

Realme already teased some of the features of its X7 Pro. The phone likely comes with a 6.55-inch 120Hz OLED display with FHD+ resolution. This hardly comes by a surprise one time that this chip supports up to 144hz refresh rates.  There is a top-left aligned punch-hole housing a 32MP selfie snapper.

Other details include 64MP main camera, an 8MP ultra-wide snapper, and two additional 2MP modules, perhaps for macro and depth shots. The Realme X7 Pro draws power from a  4,500mAh battery with 65W fast-charging. Realme probably is borrowing Oppo’s 65W charging here. The new smartphone will launch in India on September 1. The Realme X7 Pro will be joined by a vanilla Reame X7 and other handsets will also join this family soon.

Previous How Xiaomi Phones Have Changed Their Face In 10 Years