It seems no one can stop Xiaomi from making new incredible products for the TV market. Just recently, it released the Xiaomi Mi TV OLED Transparent product. It costs 49,999 yuan ($7,283). This is the most expensive Xiaomi TV, but it’s a revolutionary product. However, it’s not going to be the last surprise in 2020. The latest news shows that Xiaomi will also bring two 82-inch large-screen TVs. They should have an 8K resolution. Thus, it will become Xiaomi’s first 8K TV. 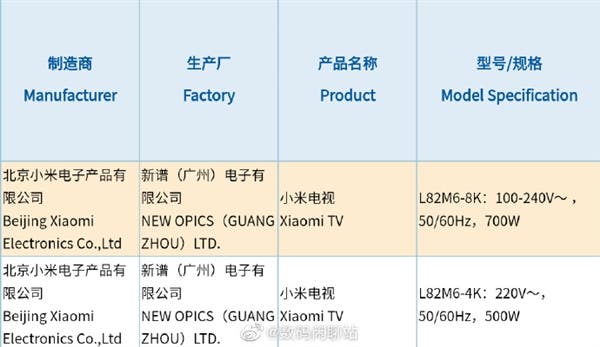 As a Weibo blogger said, two new Xiaomi TVs have been appeared on the net. And both use 82-inch LGD screens. They are manufactured by Xinpu (Guangzhou) Electronics Co., Ltd. The models are L82M6-8K and L82M6-4K. These should correspond to 8K and 4K resolution versions.

At present, Xiaomi TV uses a 4K resolution (3840×2160) as the mainstream. The previously released Redmi 98-inch TV and Xiaomi Transparent TV have achieved breakthroughs in size and innovation, respectively. Next, Xiaomi Mi TV is likely to choose 8K as a breakthrough point, bringing its first 8K TV.

Now, under the premise of rapid commercial use of 5G networks, the 8K TV have become very popular and demanded. At the same time, 5G + 8K is hailed as the benchmark flagship configuration of current color TVs. In 2020, it has become the main battlefield for 8K TVs.

At present, Samsung, LG, TCL, Skyworth, Hisense, Changhong, Konka, Haier, and other major brands have all launched 8K TV products. But at the same time, the 8K ecology is extremely lacking. So Xiaomi, which is known for its content, is expected to bring changes.

By the way, Xiaomi’s latest second-quarter financial report shows that Xiaomi’s TV shipments in the quarter were 2.8 million units, ranking first in China and top five in the world.